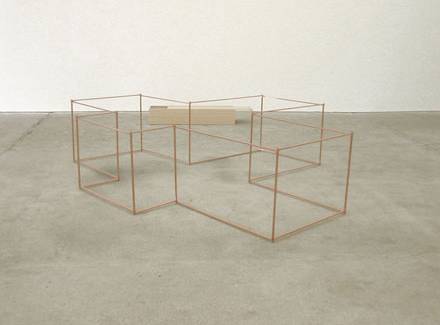 
We are pleased to announce the continuation of our exhibition series ticker. Based on an idea by Ulrike Kremeier and Marie-Blanche earlier, young curators are invited to present works of artists living and working in Berlin.


ticker nine and ticker ten are curated by Aurélie Voltz.

Starting from a formal position rather than a precise topic, the two exhibitions aim at responding to the gallery’s spatial architecture. From redesigned office to industrial building site, this is matter of questioning the place, its volumes and ambivalences, of re-evaluating the architectural tonality of the docks, with their brute lines set in contrast to the steady current of the Spree.

If the first ticker is concerned with landscape, with contemplation and stability, given to reflect on the notion of scale and the relations between human body and world, the second ticker belongs the order of the unfinished, of an action in the course of setting the space in tension, embellished with dispositifs and works in process.

Realised during a long journey downstream the river Amazonas in Brazil, Cécile Belmont’s “Broderies de voyage” (2000) retrace the passing landscapes and banks one does not keep more than a vague, subtle impression of. Often abstract and full of imperfections, these embroideries comprise in themselves the will to quickly draw a horizon, a hill, a surge tank. Here they enter into resonance with the river in Berlin.

Leonor Antunes’ sculptures define themselves in a triangular space between the human, object and space. Taking the constitutive principles of sculpture, material and form as a vantage point, frequently utilising measure instruments, Antunes questions the scale of the object and the body controlling it. In a constructive and projected manner rather than in an intuitive process Antunes reproduces, transposes, reduces or aggrandizes an architectural element or domestic object, thereby changing its matter and volume and isolating it within a deviant and anonymous context: a sculpture per se.

“Modo de usar #7” and #8 (2005) inscribe themselves into the continuity of a series of pieces en kit, as transportable units of a set. The geometric construction kit #7 makes it possible to move a part of an interior column in the public library conceived by Hans Sharoun in the Potsdamer Strasse perpendicularly. The two sculptures realised in Berlin belong to a global project: working with public monuments (museums, television tower etc.) duplicated and reconstructed in the west or the east between 1961 and 1990, during the period of the wall. Rather organic, both spheres are conceived as elastic units and condense the principles of measurement and extension within them, in an immediate physicality with the viewer.

By way of his piece “Above the weather” (2005), Jason Dodge equally looks into notions of distance and scale, asking what can relate us, humans, terrestrians, to the sky. An assemblage of different materials (wool, string, cable, rope, security tape) – common features are extendibility and, next to length, a certain solidity – is placed on the floor. The title suffices to imagining how the materials, one tied to another, form the distance needed to go beyond the clouds. A stratosphere of 12 km, to quietly observe the earth from. Skillfully combining reality and fiction, Jason Dodge leads us towards a world of universal time, where the works, often mise en scène, rest in suspension: one does not know whether something already has happened or if it is to come.

It is also through an imaginary and narrative mode that Paul cDevitt’s
drawings are realised, drawings figuring a world lost, abandoned or
unknown. A multitude of graphical languages are combined to represent deserted spaces where the human has been replaced by hens or penguins, birds long bereft of the capacity to fly. Bringing together reality and science fiction at once, “Snowman” (2005) is part of a series of drawings in black and white. This binary tonality reflects the mirroring effect of scenes in glacial landscapes, in an Olympic calmness met by agitated black skies, nebulous and vast, where it remains unclear whether they are issued from this planet or from another galaxy.

This virtually mental universe is in an altogether different, rather psychological way also the world of Vittorio Santoro. Observing the effects of social events on the human consciousness, his installations mediate the diffuse sentiments in the face of our relation to the world: memories, emotions, fear and shame. “Good-bye darkness” (2001-2005) is a Venetian blind hung near to a shield in rotation, with “heute” written on the one side and “yesterday” on the other. Slowly destroyed by the rotating movement, the slats splay and spread apart, scattering the stability of an everyday object made up of regular lines, seemingly unchangeable. Placed in the centre of the exhibition space, near to the offices, the piece comes into resonance with the gallery interior, with the window blinds and glass doors. And, by way of that, enters into a dialogue with the relative intimacy of the inhabited space.