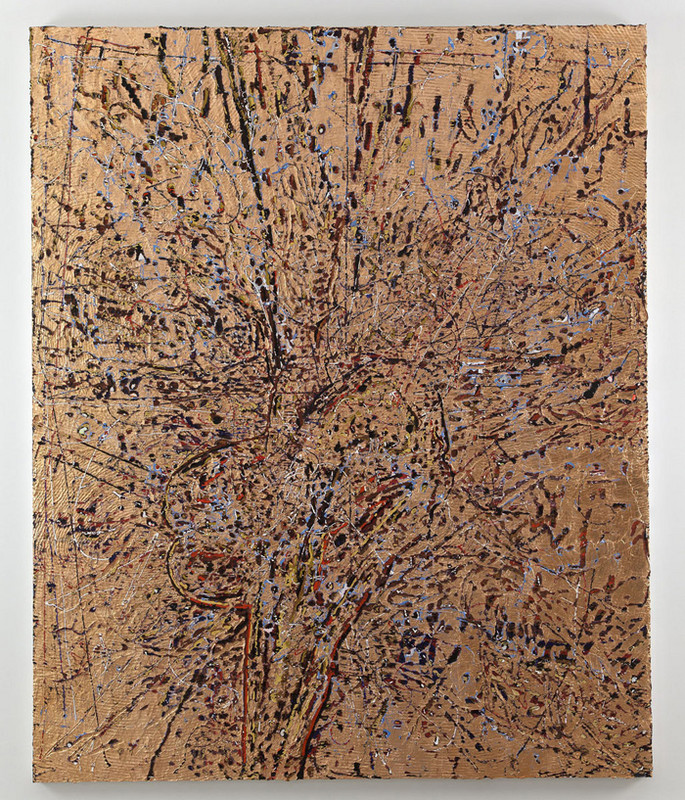 Casey Kaplan is pleased to announce a solo exhibition of new works by Garth Weiser (b. 1979, Helena, MT). Weiser will present new paintings that expand upon two distinct, yet interrelated bodies of work first presented in his May 2011 exhibition with the gallery.

Weiser’s paintings are the product of layers of contradiction, each resulting equally from chance as they do from a conscious manipulation of time and material. The works outwardly display a quick, surface effect that belies a slow, systematic building. Additionally, in what can almost be described as a process of cannibalization, Weiser uses previous paintings as source images for the production of new works; propelling his practice forward while simultaneously bearing the accumulative traces of translation and degradation.

New interference-pattern works disguise themselves as monochromes and forgo the spinal element that characterized previous paintings, instead favoring an allover composition. Creating an attention that lingers on the surface, the pattern functions less as a screen and more as a barrier, limiting access to the painting’s layers. Despite maintaining their references to digital distortion and abstract organic patterns (such as wood grain and aquatic vibration as well as the mathematic correlations between the two), these works do not merely create an optical effect. Their muddled and degraded edges work to give shape to a pulsing, auditory hum. In some cases, the interference-pattern is slashed or scarred, interrupted by blistering lacerations that appear at once to be erupting from the under-painting and attacked on the surface.

The brazen finish of new copper works acts in direct and conscious opposition to the deceptively staid appearance of Weiser’s interference-pattern paintings, with their molten finish that is almost geologic in its force. Weiser first applies piles of colored paint in a free form and gestural manner. The copper membrane then covers and in effect hides the expressionistic under-painting. The works then become sites of excavation. Weiser uses a razor blade to scrape and gouge their surfaces with an intensity that at times punctures through the canvas itself. The brevity of the physical cut negates the series of fluid actions that precedes it. As the incision follows the impulsive and spontaneous gestures, they are rendered topological, hard-edged, and graphic – a slice reveals the heaped residue of a now dissolved process.