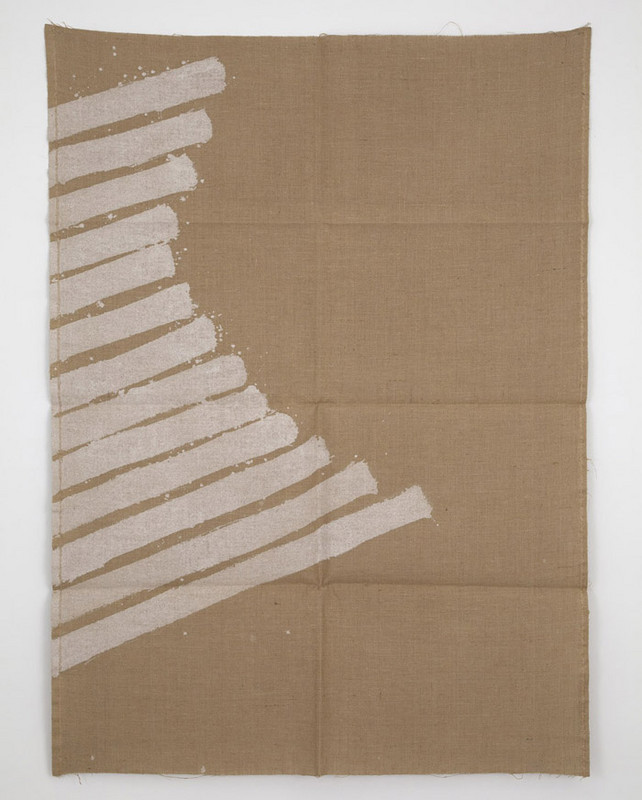 Casey Kaplan is pleased to announce FRAGMENTS 1968 – 2012, an exhibition of new and historical paintings by Giorgio Griffa (b. 1936, Torino, Italy). Spanning four decades of Griffa’s career, this is the first solo exhibition of the artist’s work in New York since 1970, as well as his first in the US since 1973.

The exhibition presents a selection from over forty years of Griffa’s paintings on un-stretched canvas and linen. Throughout the past four decades, Griffa has undertaken a practice that he describes as “constant and never finished”, adhering to “the memory of material”, and to the belief that the gesture of painting is an infinite one. Within the finite frame of his canvas, each artwork becomes a site of collaboration between painting and the painter as the hand works to reveal a constellation of signs and symbols. This relationship is further mediated by the materiality of the works: the absorption of the acrylic into the fabric from each stroke dictates the brush’s next move. The completion of a canvas functions as a suspension of this relationship. After the acrylic has dried, they are carefully and neatly folded into uniform sections and filed as a register of their collective life as a whole.

The artworks from the late 1960s and 1970s display the use of an “anonymous” sign, the simple and repetitive movement of the artist’s paintbrush to create uniform task-like marks that serve to record the process of painting. These early, minimal compositions began with ordered horizontal and vertical lines that eventually gave way to the use of sponges and fingerprints. While this period displays a shift from the anonymous to the personal, it is united through the consistency of deliberate end points or breaks in pattern and reveals the construction of the paintings as an action interrupted.

Griffa’s paintings actively resist perspective and narrative, instead favoring a cyclical connection to the memory of painting as an action. Time is present through aesthetic shifts in the work that are most notable by decade. These mark making variations reveal an awareness of the artist’s surroundings and provide evidence of the time within which he was working. For example, in the 1980s Griffa’s practice evolved to include expressive forms and brighter tones, coexisting with discordant arrangements of unfinished planes of color. He began to utilize a more concrete set of references in the “Alter-Ego” series (1978 – 2008), in which Griffa aspired to come to terms with aspects of painting’s memory within the works of other artists, such as: Matisse, Merz, Klein, Tintoretto, Beuys as well as imagery of the Romanesque and international Gothic periods.

This shift, from ordered marks towards a broad range of gestures, eventually led to the inclusion of numerical systems into his artworks in the 1990s. Still characterizing his paintings today, the “Canone Aureo” series displays Griffa’s interest in mathematic and scientific structures that underlie our natural world. These infinite sequences, such as the Fibonacci series and the Golden Ratio, act as a parallel to Griffa’s practice, and additionally function as punctuations in the work’s vocabulary. They also determine and organize the signs within a work. Despite these varied trajectories, it is the act of painting that always remains at the forefront. Griffa said in a recent interview with Luca Massimo Barbero: “If these works have the power to speak and to listen, I’ll let them do it themselves.”