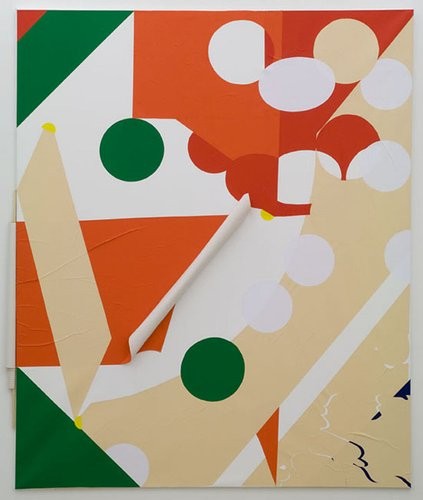 For his second solo exhibition at the gallery, Henning Bohl will present a bold new body of work in an installation inspired by theatrical stage settings, street fairs, and subway platforms. The exhibition features large canvases resting on sheetrock tables or hinged to the walls of the gallery like staged partitions.
Henning Bohl continually questions the methods for producing and exhibiting artworks. For Bohl, exhibition environments, including the way artworks are made, installed, and displayed, become self-imposed situations that demand a specific form of observation. He is interested in the idea of dramatizing these pieces in different formal arrangements that are engaging and performative. By uniquely dividing and creating different areas of space in the gallery, Bohl navigates a path and outlines sceneries for the viewer. The sceneries can create both a variety of plays for one setting or a variety of settings for one play.
Bohl draws shapes with scissors and pastes them directly to the surface; elements such as sickles, tears, and circles are formed from rolls of colored window display paper and applied onto primed canvases.
Sections are left curling up into tubular rolls, enhancing air bubbles, wrinkles, and ruptures that artificially evoke the clammy peeling of wallpaper posters in a subway station or the lifting of the curtain shortly before a play. The fragmented imagery alludes to Kabuki Theater faces seen in his earlier work, but is now deconstructed and abstract, leaving still a physical semblance of the vibrant caricatures. Although his works still function as paintings, the artist has chosen to present them as sculptural objects. Bohl alters the standards of presentation by supporting the canvases with tables made from cornices created for a previous exhibition. These architectural fragments consist of serrated sheetrock haunches, presented upside down on pairs of wooden trestles. While originally, Bohl hung canvases from these cornices, his new works now rest on the cornice’s fragments and are presented either as one entity or as individual objects presented on a table. Letters are stenciled across sections of these tables, words that are derived from the titles of two popular German magazines "Theater Today" and "Psychology Today".
Bohl refers to their most literal sense: whereas theater is about creating a fiction while psychology tries to destroy it. "The Ate R He Ute" and "Psyc Holo G Yto Day," are interspersed throughout the gallery, sounding like a series of stutters and appearing as concrete poetry. Split into syllables they both complement and contradict each other, weaving their narrative with the canvases and tying them into their own logic of semiotics and succession.
Bohl’s recent solo exhibitions include the Oldenburger Kunstverein, Oldenburg, Germany and Galerie Johann König, Berlin, Germany. Bohl was also included in the group exhibition, “Egypted" (curated by Will Benedict) at the Kunsthalle Exnergasse, Vienna, Austria. Bohl is currently preparing for a solo exhibition opening June 30, 2009 at the Staatliche Kunsthalle Baden-Baden, Baden-Baden, Germany and Pro Choice, Vienna, Austria (with Sabine Reitmaier). The artist lives and works in Berlin.
www.caseykaplangallery.com