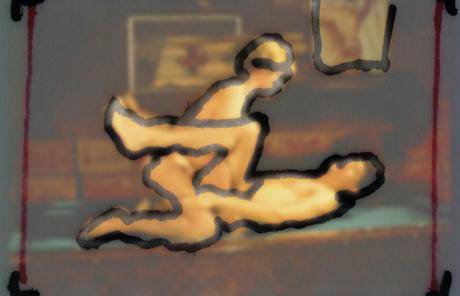 Casey Kaplan is pleased to present the sixth solo exhibition of Jeff Burton in New York. For over fifteen years Burton has been involved with Hollywood's adult film industry and has been inspired by the physical and cultural landscape of Southern California. Embracing a role as both insider and outsider, Burton’s photographs exist in a space between fantasy and reality defying any clear definition or category. The artist’s unique body of work travels seamlessly between pornography, fashion, celebrity and art. In Burton’s most ambitious exhibition to date, the artist will present a new body of photographs that explore the practice of image making and the notion of performance through his personal relationships within Los Angeles.

In a series of small-scale photographs, Burton re-contextualizes found transparencies from pornography shoots that took place in the 1970s. Each transparency is overlaid with drawings and crop marks originally made by an art director to instruct in the final printing of the image. Alongside these works hang photographs that are a continuation of Burton’s ongoing project as an observer in Hollywood. The images focus on peripheral objects, landscapes and body parts, isolated, fragmented and disengaged from their original purpose. Much like the visible editing marks in the found transparencies, Burton’s image making practice is about cropping and capturing distinct moments. Rather than documenting the constructed fantasies of Hollywood, Burton makes a picture that is as much about what exists outside the frame as what is present in the photograph.

Other photographs in the exhibition emerge from a different Hollywood scene involving Kenneth Anger, widely known for his iconic book Hollywood Babylon (1958), and films such as Scorpio Rising (1964). Burton received an invitation to document the aftermath of an alleged criminal act at Anger’s Los Angeles home. Somewhere between documentary and performance, the startling images that unfold during Burton’s encounter with Anger describe a character embodying a dark vision of glamour and decadence that could have come from the pages of Hollywood Babylon itself.