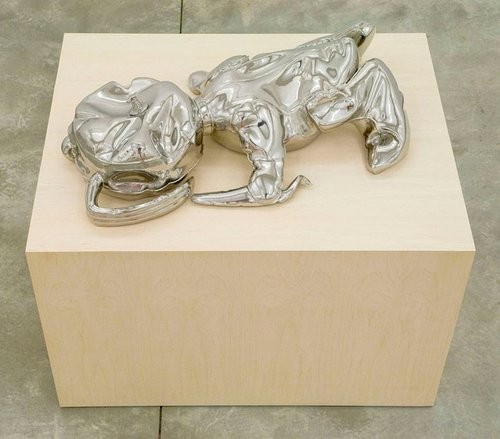 “Appropriation is something I have used or worked with in my art since starting art school in 1987. At this time (and still now) I realised that being original was almost impossible, so I tried using what was already available as source material for my own work. By doing this I think I also created something original and certainly something very different to what I was representing.
I always think that art is about ideas, and surely the idea of an original and a copy of an original are two very different things.” – Jonathan Monk, 2009 Casey Kaplan is pleased to present new work by artist, Jonathan Monk (b. 1969 in Leicester, England, lives and works in Berlin, Germany), in his sixth solo exhibition with the gallery, The Inflated Deflated. Previously, Monk has taken on artists such as John Baldessari, Chris Burden, Sol LeWitt, Ed Ruscha, and Lawrence Weiner, as source material for his own artwork. For this exhibition, Monk turns his attention to the artist, Jeff Koons. By employing his own intrinsic artistic strategies, appropriation and recontextualization, Monk presents an exhibition that appends art history with a narrative of his own interplay between the objects and ideas of the past and his newly conceived reincarnations. In the late 1980’s, while Jonathan Monk began art school in Glasgow, Scotland, Jeff Koons created a highly polished stainless steel cast of an inflated, plastic bunny shaped balloon, entitled “Rabbit”, 1986. The sculpture debuted that same year in the seminal Group Show at the Ileana Sonnabend Gallery in New York. “Rabbit” has become an icon of its era. Utilizing a similar inflatable, carrot carrying, plastic toy bunny as a starting point, Monk presents his own version of Koons’ infamous work in five different poses. Monk’s stainless steel bunnies capture five frozen moments of silent, animated, slow deflation. With each dissipation of air, the mirrored bunny droops, folds, and gently falls from a standing position to a reclined figure. If seen as a sequence, the sculpture ultimately comes to rest in a low, undulating heap of metal, recalling one of Henry Moore’s classic bronze reclining nudes.
Surrounding the five sculptures are five photorealist style paintings that depict various stages of the fabrication process of Monk’s bunny sculptures from the clay moulds to welding of steel. Through the paintings, Monk demystifies the process of the creation of his own artworks as a conceptual component to the exhibition.
In Gallery III, the exhibition transitions from balloons losing their air to light bulbs that gradually burn out and go dark.
Monk additionally presents four wall-based, light bulb artworks entitled, “The Death of Geometric figures” (circle, square, rectangle, and triangle). Each of the geometric signs is a mirror surrounded by ceramic white light bulbs that recall Hollywood-style vanity mirrors, and also artworks from the 1960’s and 70’s by various Conceptual artists. As the bulbs burn and fade to black, Monk’s signs become realized.
The Inflated Deflated will run in parallel with The Deflated Inflated at the Lisson Gallery in London, May 20 – June 13, 2009. Following his opening with the gallery, Monk will present an exhibition of unique t-shirts and posters at Specific Object, New York, May 8 – June 12, 2009. Opening May 14, Monk will present The Rew-Shay Hood Project Part II, at Artpace, San Antonio, Texas. Monk’s work is also currently on view at the Museum of Modern Art, New York in an exhibition curated by Christian Rattemeyer, Compass in Hand: Selections from The Judith Rothschild Foundation Contemporary Drawings Collection, through July 27. Recent solo museum exhibitions include Time Between Spaces, Palais de Tokyo and Musée d'art Moderne, Paris, France, 2008 and Yesterday, Today, Tomorrow, etc., Kunstverein Hannover, Hannover, Germany, which travelled to the Kunstmuseum St. Gallen. St. Gallen, Switzerland; Kunsthalle Nürnberg, Nürnberg, Germany; \and Leiterin Haus am Waldsee, Berlin, Germany from 2006 - 2007.
www.caseykaplangallery.com