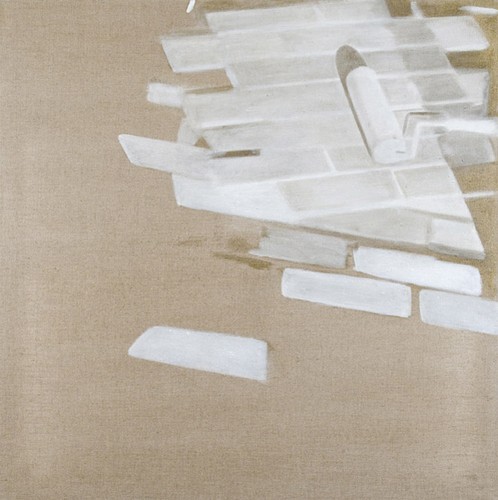 Casey Kaplan is pleased to present a new series of work by Julia Schmidt. A current recipient of the Villa Romana Fellowship, the artist has spent the last ten months living and working in Florence, Italy.
Schmidt, known for bridging stylistic boundaries between Glasgow and Leipzig and gearing away from contemporary German figurative painting, will present for her second New York solo exhibition a body of work that includes her signature method of oil painting on MDF, with an extended range of media including oil on canvas, collage, and paper edition posters.
As implied in the title, “Lavoro,” (the Italian word for “work”) Schmidt situates her production among other forms of labor while emphasizing a dichotomy of relationships with painting by considering the process of painting, “to work,” and the final outcome of painting, “the work”. This element is integral to Schmidt’s exploration of painting as she shapes the positive and negative surfaces of the support through an intensive method of layering, detailing, erasing, and repainting until the final outcome is an abstracted interpretation of the original subject matter.
While considering the new series of oil on MDF paintings in context to the exhibition as a whole, Schmidt culls found images to create a network of ideas and thematic inter-relationships while at the same time referencing and reexamining historical practices. A calculated shifting of imagery such as microphotography of pig bristles used in the manufacture of paint brushes, a peasant farmer dwelling from 1970’s Romania, and a detail of submerged layers from a Botticelli masterpiece switches between the quotidian and the exotic and reflects on the function of intrinsic and market values. Schmidt carefully balances her concerns with aesthetics, media, and an economy of signs through an index of painting and the use of a cool and particular palette that renders a surface that is conceptual both in ideology and style.
Gallery III will include collage, poster sets, and oil on canvas. These works directly correlate to Schmidt’s paintings on MDF, by reiterating the use of found images on an explicitly reflexive level. It further associates the valuation of commodities and image making through methods of machine and handmade production.
Julia Schmidt was born in 1976 in Wolfen, Germany and trained at the Academy of Visual Arts in Leipzig and Glasgow School of Art. Schmidt, with fellows Dani Gal, Asli Sungu, and Clemens von Wedemeyer, were presented for the first time in a group exhibition at the Deutsche Guggenheim, Berlin, Germany, “Freisteller: Villa Romana Preisträger.” Solo exhibitions include: “Tourism and Painting,” Sachsen LB Art Prize, at the Museum der Bildenden Künste, Leipzig, Germany, which traveled to Kunstforum Ostdeutsche Galerie, Regensburg, Germany (2007/06). Other group exhibitions include: “Wollust,” Columbus Art Foundation, Leipzig, “Rosebud, Eine Suche zwischen Opulenz und Leere” (curated by Tilo Schulz) at the Kunstverein Langenhagen, and “Compilation III,” Kunsthalle Düsseldorf, Germany.
www.caseykaplangallery.com