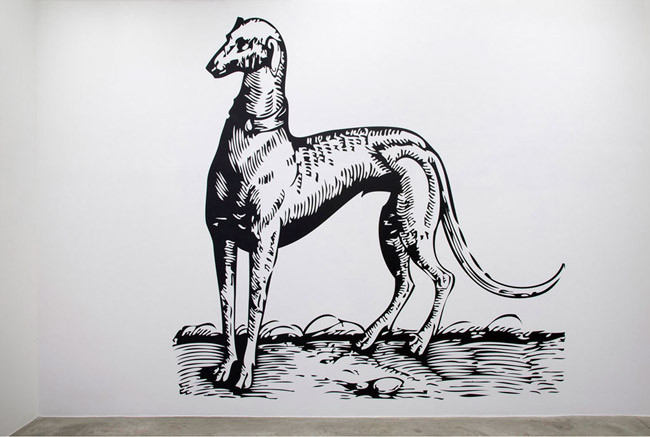 Casey Kaplan is pleased to announce Scorpion and und et Felix, an exhibition of new works by Liam Gillick (b. 1964, Aylesbury, UK).
The exhibition takes its title from an early unpublished manuscript of a comedic novel by Karl Marx, Scorpion and Felix, in which three characters Merten, the tailor; Scorpion, his son; and Felix, his chief apprentice, engage in a satirical narrative that abstractly references irresolvable philosophical polemics. In one chapter titled, Philological Brooding, Marx etymologically references himself within the origins of Merten’s name. At the end of the fragmented narrative (only pieces of the text survive today and much of it is thought to have been burned by Marx himself), Merten attempts to save his dog, Boniface, from a miserable death by constipation - a fate that Merten compares to the agony of Boniface’s inability to speak and to write his own thoughts and reflections.
Merten cries out in the last line,"O admirable victim of profundity! O pious constipation!"
Incomplete, and therefore only open to a partial reading or misunderstanding, the novel is an entryway into Liam Gillick’s exhibition and practice; its final point also open to interpretation as a self-deprecating, comedic reflection on the archetypal struggles of all artists, writers, filmmakers, poets, and others. Gillick’s practice is a divergent one (including sculpture, writing, architectural and graphic design, film, and music) that resists methodological boundaries and constraints, and shows a fondness for discursiveness, distractions, and evasive tactics.
Since the late 1980’s, Gillick has focused on production rather than consumption, examining how the built world carries traces of social, political and economic systems. Anticipating a forthcoming survey of Gillick’s work from the 1990’s at the Hessel Museum of Art, Annadale-on-Hudson, Scorpion and und et Felix continues a series of floor mounted rail sculptures that he began in 1988. Rails are typically a functional form that provide support or alternatively limit access to a space. Here, they are placed on the floor and at obscure heights on the walls, questioning their function (or nonfunction) to create a linear framework for the viewer’s movement through the first two rooms of the gallery. In the third room, Gillick presents new, monochromatic L-shape forms that also traverse the floor and the wall. Reminiscent of office cubicles, barriers, waiting areas and processes of renovation, they operate as semi-autonomous abstractions and reiterate Gillick’s interest in the legacy of “applied modernism”, the two way movement between utilitarian design and modernist art and architecture.
Three large-scale graphic works derived from medieval woodcuts confront the implied contemporary vernacular of Gillick’s wall-based and freestanding structures. Previously presented in past exhibitions as posters and graphics, the vinyl wall-drawings show a character spinning yarn and two dogs. Together, the works in the show pursue logico-formal connections in an ahistorical narrative about thoughts and material.
Liam Gillick (Born 1964, Aylesbury, United Kingdom) lives and works in New York. A survey of the artist’s projects and installations from the 1990s, entitled Liam Gillick: From 199A-199B, curated by Tom Eccles, will open on June 23rd at the Hessel Museum of Art, Annadale-on-Hudson, New York. Gillick represented Germany at the 53rd Venice Biennale, 2009.
Past solo exhibitions include: Liam Gillick: One Long Walk – Two Short Piers, Kunst- und Ausstellungshalle der Bundesrepublik, Deutschland (2009) and the travelling retrospective Three Perspectives and a Short Scenario, Kunsthalle, Zürich, organized by Beatrix Ruf (2008), Witte de With, Rotterdam, organized by Nicolaus Schafhausen (2008), Museum of Contemporary Art, Chicago, organized by Dominic Molon (2009). Liam Gillick publishes texts that function in parallel to his artwork including: Proxemics (Selected writing 1988-2006), JRP-Ringier (2007); Factories in the Snow by Lilian Haberer, JRPRingier (2007); Meaning Liam Gillick, MIT Press (2009); and Allbooks, Book Works, London (2009).
www.caseykaplangallery.com