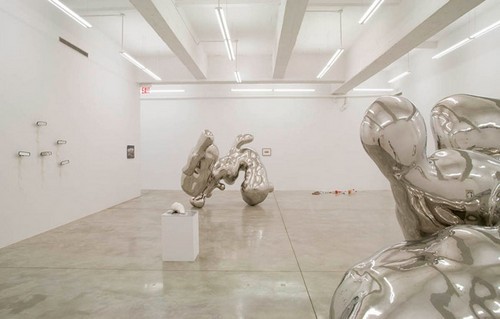 Fifteen years ago, Casey Kaplan started with a small group of artists in a modest single room loft located in SoHo. Today the gallery now represents twenty-one artists in an expanded space (formerly a taxi garage) on 21st Street in Chelsea. During this time the gallery’s artists have become integral in the current discourse, achieving mid-career retrospectives, participating in Biennales and Documenta, and winning prestigious grants and awards, including the Turner Prize.
In commemoration of the gallery's fifteen year anniversary this past March, we have decided to celebrate this July with "Reflection: 15 Years," an exhibition consisting of one work from each of the twenty-one represented artists.
Included in this exhibition are diverse artworks in all media, including: painting, sculpture, photography, silkscreen, video, film, and works on paper. As part of this exhibition we are excited to present for the first time in New York, Simon Starling’s “The Nanjing Particles (After Henry Ward, View of C.T. Sampson’s Shoe Manufactory, with the Chinese Shoemakers in working costume, North Adams and vicinity, ca. 1875),” originally commissioned and exhibited by MASS MoCA in 2009.
The exhibition will include signature early works; such as Miles Coolidge’s “Storefront, Hospital, Office Bldgs,” from his 1994 "Safetyville" series, Liam Gillick’s “Discussion Island Research Screen,” 1999, and Annika von Hausswolff's “Attempting to Deal with Time and Space,” 1997. These seminal works signify key moments in the artists’ careers, and exemplify the gallery’s own history. This past year alone has seen the gallery initiate new relationships with Geoffrey Farmer, Marlo Pascual, and David Thorpe. This show will be the first time for Farmer’s work to appear in the gallery, who will have a solo exhibition in the beginning of 2011.
Much like the gallery itself, this exhibition is manifold, marking the beginnings of exciting new projects and endeavors while still encouraging current dialogues and relationships. Our reflection is a moment to look back, and to continue to move forward.
www.caseykaplangallery.com