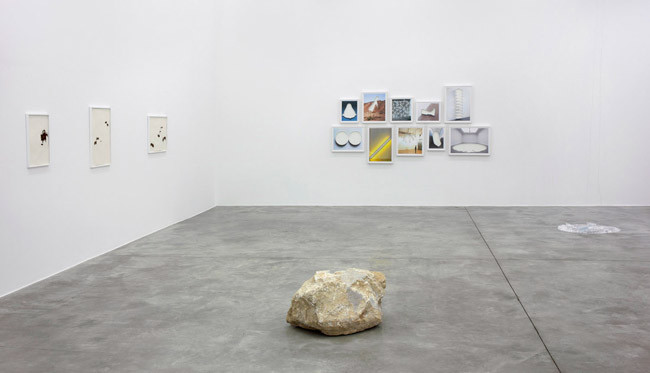 Casey Kaplan is pleased to inaugurate 2012 with a group exhibition, Rotary Connection, organized by the gallery’s director, Loring Randolph. The exhibition brings together 13 artists who, despite different approaches, all challenge conventional models of artistic processes. A web of interwoven art historical references and ideologies connects the sculptures, paintings, and images on view in an installation that aspires to incite multi-disciplinary discussions with varied readings relating to themes such as: the displacement of the figure and the subject, the phenomenology of the viewer, and the deconstruction of systems. In Rotary Connection, what is visible is as important as what is unseen.

Étienne Chambaud’s two sculptures are objects that have been formed and deformed through subversive acts, emphasizing the fragile balance of context, representation, and meaning. Objets Rédimé (les livres), 2010, consists of three cast glass books that have been dropped to their demise from the gallery’s ceiling to the floor of the exhibition space. « Atlas, », 2011, presents a found atlas with holes cut into its pages, displayed at its center, and leveled flat resting on a plinth. The remaining object confuses and combines political and geographical boundaries.

Isabelle Cornaro’s practice begins with documents and archives belonging to history and culture. Utilizing these images and documents as a framework, Cornaro creates, through various processes and mediums, artworks that question and deconstruct the systems of representation that these sources denote (of objects, life, architecture, and nature). Based on historical images of landscaped gardens the exhibition presents three drawings created from wisps of hair and cut paper, plus an ethereal spray painting, entitled, Of Cinematic, 2011, where nuances of compositions in Impressionist paintings have been rapidly captured.

Julia Dault’s artworks harness the limitations and the contingencies of gesture, time, and material, as their subject matter. Dault’s most recent sculptures consist of draped, un-stretched paintings that layer vinyl, pleather, and other materials of costume and display. While taut, Dault scrapes through previously applied layers of paint with a simple toothed tool to reveal both singular and repetitive gestures, additionally exposing metallic, reflective, transparent or vibrantly colored under surfaces.

Jose Dávila takes simple industrial, building materials with appropriated images as his medium to create artworks that contest the inherent qualities of modern architecture and other constructed spaces. In, Topology of Memory, 2011, Dávila has removed famous artworks from their surroundings, exposing the interior and exterior sites as the subjects. Mirage No. 2, 2011, is reminiscent of a number of past artworks, including Kazimir Malevich’s White on White from 1918. However, in Dávila’s case, the wall acts as the canvas within a series of receding vinyl outlined frames, as panes of glassslip out of place to create an illusion of form.A copper bell hangs in the third gallery with no clapper inside it to ring. The only time it sang out was when attached to the end of the broom of chimney sweep, Jonas Vytas Keršys while he cleared ash and soot from chimneys in Vilnius, Lithuania. This past journey and the bell’s sound are now an imagined occurrence – immortalized in the mind - by all who see its shell.

Jason Dodge’s displaced objects tell a story of their history as evidence of a transformation that has already taken place through Dodge’s own actions and those of others.

Ryan Gander’s art tells a story in hopes of activating the viewer’s imagination, directing them to begin to remember or to misremember history in order to create a new “future history” of art. Multiple fictional characters and personas, processes, subject matters, and media, function within a system of production that Gander has created where the spectator must believe that the world is a constructed reality, one where anything can be true. An exhibition poster for a fictitious show entitled “You need to see this beauty broken down” and a fragmented historical icon direct the viewer to fill in the gaps.

In the late 1990s, Liam Gillick created an artwork consisting of a set of instructions to paint swatches on a wall to try to replicate the color of coca-cola, challenging the instructed person to re-examine their relationship to architecture, as well as the relationship of art production to social and economic structures. Three drawings in the exhibition are presented in the three rooms of the gallery, and show Gillick’s own graded attempts, Tango colored conference room, Pepsi colored foyer and Seven-up colored lobby, that additionally comment on the implications of the aesthetics in these structured places of temporal occupation.

What if this guy was a figment of my imagination, 2011, Andrew Kuo’s painting, quantifies the nonrepresentational – thoughts and emotions – in a mimetic relationship between text and image. Typical of his diagrammatic paintings that draw on the language of info-graphic images, the work contains fields of color that abstract a depiction of a 360-degree book hovering above a corresponding key. While it points towards modernist geometric abstraction, Kuo’s work is imbued with a unique complexity as it functions to document his daily life and oscillations of his psyche.
In many of his works, M a t e o Lóp e z creates sculpture from drawings, and then uses drawing as a means, a process, and an investigation into the narrative. Sometimes the work contains studio-like scenarios, often functioning to blur the line between production and display. By creating a system of lines on uniform rectangles of paper and creasing these lines, López delineates a 3-dimensional typography out of paper. His Paper Poems unfold on two shelves, changing daily over the course of the exhibition. Day 15 reads: “Time has” on the upper shelf, and “beaten us again” below.

Benoit Maîre’s practice is rooted in philosophy and theory. His paintings, installations, and films aim to create new systems of aesthetics through an investigation of whether an image (or an object) can be a concept and the distance that exists between the visual and the textual. In the exhibition, all three sculptures function around themes of the gaze. A bronze head of the Medusa faces her opposing reflection, Alberto Giacometti’s Nose, 1945 (cast 1965), is poised on a tripod as a camera, and a new sculpture, conjugaison du 16 novembre 2011: la question d'amie, is a vitrine with objects and images positioned to be experienced by the viewer from a specific vantage point.

Arthur Ou’s oeuvre includes photography, sculpture, and installation. His practice is engaged with questions of modernism, historiography, and documentation and their roles within visual culture. The four photographs on view, Primer 1 – 4, 2011, assimilate two different images and subjects, landscape, and studio photography, onto one plane in film through double exposures on a single negative. In this collapsed space, wire sculptures draw gestural lines over rock face expanses.

Over the past few years, Marlo Pascual has investigated the malleability of the photograph as physical material. In a recent series, Pascual scales and reprints found images of performers on watercolor paper, and then folds the paper at specific points to distort the image. Pascual’s latest image of a woman standing in front of a curtain is rendered life size, the figure engulfed by the drape of the fabric.

Pietro Roccasalva’s practice includes a wide-range of media such as painting, performance, sculpture and photography, that create what the artist calls “situazione d’opera” (“a worksite”), in which images and iconographies circulate in an ongoing process that eventually comes back to its departure point: painting and its power of simulacrum. The work in the show belongs to a series of white marble pieces titled, Che cosa sono le nuvole (What clouds are), which materialize the artist’s refusal to participate in a number of exhibitions. Embedded into a wall, each marble is the size of an A4 sheet of paper and is carved with the details of the show (date, venue, list of artists participating, title, and curator).
The letters are then filled with black ink with the exception of Roccasalva's name, which is left indecipherable.
www.caseykaplangallery.com