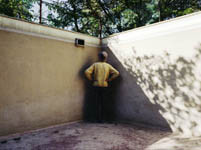 Every day, so many gestures and words - unremitting, periodic, automatic and often implicit - allow us to communicate, to act and to be. Everyday life, mostly seen as banal because of its characteristic recurrence and monotony, touches closely upon our existence as social and cultural beings. Questioning daily routine, playing with what is left unsaid, also means breaking with daily habits. In the raw, the dynamic of actions and utterances - some absurd, some violent, some convenient, some trivial - appear as a series of functionalities, backdrops, social codifications, strategies and human expectations, which are embraced and accepted uncomplainingly in their daily reenactment. The accumulation of the daily bears witness to the evolution over time, and reflects states of change and rupture, of being and disappearing.