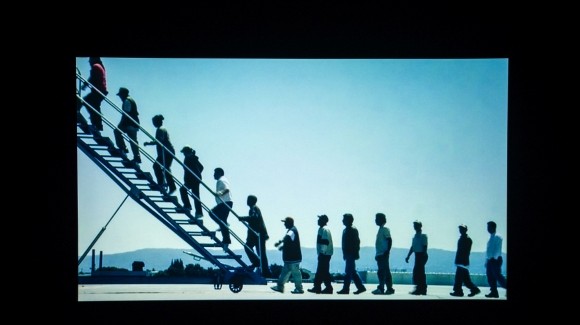 In the framework of the 5th edition of the European Month of Photography in Luxembourg (in partnership with the cities of Athens, Berlin, Bratislava, Budapest, Ljubljana, Paris and Vienna) Café-Crème, non-profitmaking organisation, presents, under the generic title Memory Lab - Photography Challenges History, an exhibition which is displayed as four parts and shown at Casino Luxembourg - Forum d'art contemporain, Mudam, the Cercle Cité and the Musée national d'histoire et d'art.

For a long time, the role of photography has been going further than simply recording facts by combining fiction and reality in different ways, particularly through personal sensitivity, ironic distancing and analytical subjectivity.

Videos and photography presented in the framework of the exhibition Memory Lab IV - Transit at Casino Luxembourg, show how 'past and present' are going through an iconographic rhetoric which places the spectator in 'transit' through a recontextualisation of personal experience and collective history.

The video by Vladimir Nikolić, The First Murder, retraces the path of the assassination of the Yugoslav King Alexander Ist in la Canebière in Marseille through juxtaposing the 1934 film with snapshots from 2004, all taken with the camera positioned in the same places: a way for the artist to question the media coverage of the tragic events in the context of the banalisation of modern-day images.

In the same way, personal history and collective history are at the centre of many projects by Adrian Paci, an Albanese artist living in Milan. His works of art Lives in Transit (2013) and Home to go (2001) speak of conflicting situations and the conditioning of identities in socioeconomic contexts.

With reference to Walter Benjamin, the series The Angel of History (2013) by Aura Rosenberg gives new life to 'the ruins and progress of history' in a post-modern compilation which leads the spectator through a real whirlwind of history.

Going beyond the will to re-establish history in today's dialectic, the artistic offerings of Memory Lab - Photography Challenges History are made up from moments of great tension where the images represented distance themselves from the media coverage and archived documents.