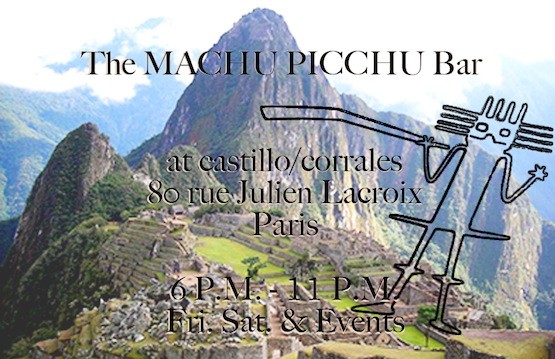 MACHU PICCHU
A month-long of events at castillo/corrales' newly created bar.
13 April - 5 May, 2012

TONIGHT, Sat 14th, Drinks are mixed and served by Onejoon Che and music is selected by Nicolas Ceccaldi.

On Friday, April 13th, a new chapter in the life story of castillo/corrales begins: the inauguration of MACHU PICCHU, the gallery’s bar.

Or let’s say, simply, the inauguration of a bar—a 1:1 scale prototype of a small neighborhood bar—as the gallery makes room completely to MACHU PICCHU, and as the project is more communal, cooperative, integrated, commerce-based, and amateur than anything ever tried out at castillo/corrales before.

MACHU PICCHU is “choreographed” by Egija Inzule, David Douard, Hélène Minoux and Julien Laugier. As April goes on, MACHU PICCHU will be operated by a number of persons who extend far beyond the group that runs castillo/corrales on a daily basis, and who will tend the bar on their own rules and beliefs. Expect to be welcomed by a new owner on every night at METRO PICTURES!

MACHU PICCHU is for a month a site for numerous concerts, readings, parties, for heavy-drinking and lightheartedness, ESL and ESP, for making out and building new friendships, arguing about neo-illichism and triennialization, postulating theories as much as gossiping. But of course, what will exactly happen at MACHU PICCHU, how it will be used and experienced, should logically be described and considered only afterward.

While most of the activities of MACHU PICCHU are spontaneously organized and acted out, some events have been already programmed, including:

13.04. at 9 p.m.: The first night sees Alex Cecchetti read from his new book “A SOCIETY THAT BREATHES ONE YEAR” published by Book Works, London. The Paris-based, art ragazzo also presents drawings, and proposes some refreshments of his own.

And then some will say —“I got carried away, he had such beautiful hands, I never suspected. He’s a basket case. My God, what a painful experience it is, merely to exist in this day and age. He was such a good-looking man; why on earth did he go mad?”
www.castillocorrales.fr