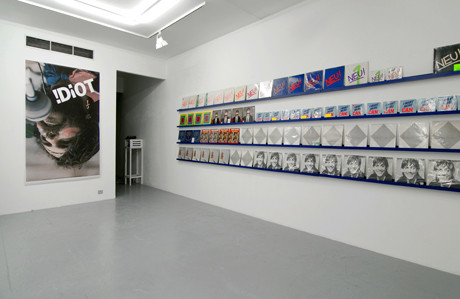 Since the beginning of the 1990s, Jacques André has been creating a conceptual work that questions our consumption habits and our relationships to material goods and ownership. To this end, he has adopted ways of working that do not follow traditional artistic practices. One of those methods, for instance, consists in buying things repeatedly from second-hand shops or over the Internet. The main idea is to acquire all the possible copies of certain items, such as records or books. The items generally have in common that they were produced in the seventies and each of them in its own way conveys the ideology of that time. For example, you will find in the artist's installation presented at Artissima 08, various editions of Wilhelm Reich's book devoted to The Sexual Revolution. You will also see some vinyl LPs by German Krautrock bands, such as Can's I Want More, or one of Neu !'s three eponymous albums. In addition, a puppet from Jim Henson's famous Muppet Show is also on display...
By purchasing compulsively such objects that are so symbolic on the cultural level, and above all, by turning them into readymade-like artworks, the artist intends to express the paradoxes inherent in our western society. A society wishing to model itself, in the post-1968 era, on a new kind of freedom but which, instead of putting this into practice, eventually subjected it to conceit.
www.catherinebastide.com