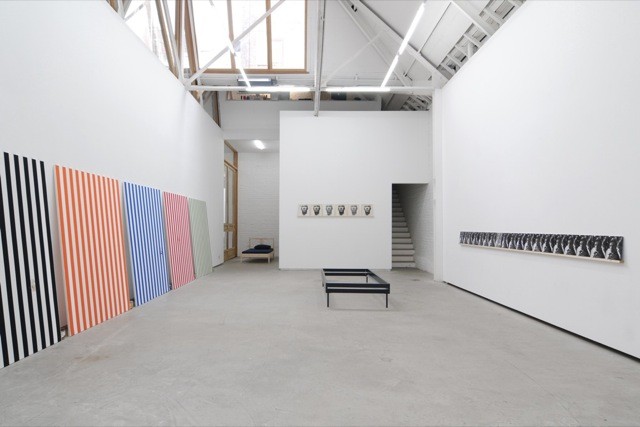 Why buy cheap furniture? Why shop at Ikea? Why not unwrap your purchases? Why ask?

Jacques André buys instead. Through buying and displaying he forms previously disassociated links between things declared of value and things without, affecting their status through material or market manipulation.

Jacques André has long exhibited items bought repeatedly on and offline in what he terms as ‘achats en repetition’. Exhausting stocks of records, books and memorabilia Jacques André seeks out every available copy of a desired product in an active paradox of consumer culture. Inverting the idea of sales as distribution Jacques André presents a reconstitution of stocks to their original collective state. In so doing a miniature market is cornered, real market value is raised and Jacques André never sells off unless he’s really, really broke...

Jacques André’s parallel status as unemployed has long countered his artistic career. KONSMO coincides with Jacques André’s 20th year out of work and the end of his entitlement to unemployment benefit. Marking the occasion a Librairie of repetitive purchases of books (unavailable for purchase) are on display. The opening of this bookshop simultaneously fulfills and confounds a career pathway much encouraged by Jacques André’s dole officers. The unconsummated ‘exhausted’ bookshop signals the exhaustion of the freely circulated stock of items Jacques André buys and is a shift in his appropriated production methods.

Six examples of Kung Fu records hang at the accurate height of the actor Carradine pictured on the sleeve whilst 19 Yves Klein’s observe the Nicole striped canvases from the perspective of a 5 year old child. Jacques André’s own body weight adds literal weight to the exhibition and is available as two kettlebells should a collector wish to carry him out of the show.

In KONSMO the concept of circulation is at the fore; that of major and minor markets, globalised and niche industry, consumption abstracted and turned on itself, a defunct yet tantalisingly latent economy, exhausted.
www.catherinebastide.com