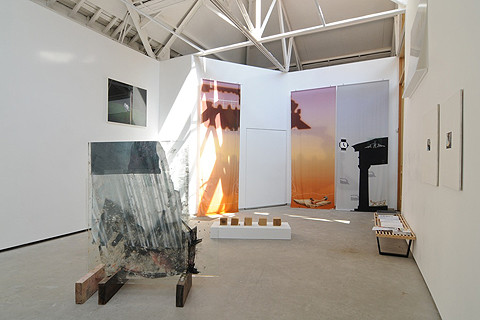 Bellagio Mentale
Two persons, customarily dressed, sit on opposing sides of a fountain. Their thoughts are interdependent. They make sketches exploring eidetic imagery. Both persons are skilled in the redirection and recall of anxiety, legitimate attachment, and nuances in concepts like “vernacular” and “kitsch”.

A presentiment is on our two persons, and their first sketch is a redirect. They divide the paper into quadrants: lyrical, bureaucratic, seasonal, eternal. ‘Tis the time for syrup and the contour of a bucket unites the quadrants in one of the drawings while distinctions are decomposed in the second sketch because of the sap that drips from the tap. Returning again is the same presentiment... sugar (cancel)... cane (cancel)... molasses (cancel). To the north we had no such problems. Redirect: sketch something for use on the label of a bottle. Obviously, this would have to be a leaf. At that, the sound of the pump distracts our two persons, although nothing about it has changed.
“We’ll call this one finished for now.” Four leaves align at the midrib but have variable blades.
The two persons turn their attention to the fountain’s absolute texture. It collapses into mists along with the city’s other effects. Unfolding through the vapors is a scene between two men at a gas station. In the first episode the vapors condense around the men as if in an explosion. In the second scene they drop and float around the men’s feet. In the final episode there is an infusion and the men become personified clouds. Restless and ashamed of this image, the two persons rehearse other options. Through the vapors, and with high concentration, they bring into focus an articulated haircut and some ethnic detail.
It whispers, “Verochka, don’t worry, good dialogue is often given to the secretary.”
The two persons, wait for the vapors to vacate this pattern. They change positions and return to one of the many surfaces they’ve worked on before. They imagine the fountain’s prehistory, the megalith, so many purposes animated in one’s mind. Transported, alarmed, presentiment now an effusion of primary feeling, they return to the water, everything moves but nothing refuses. The fountain is lit, the water is colored and it dances to Aaron Copland’s Appalachian Spring. The pump works overtime.