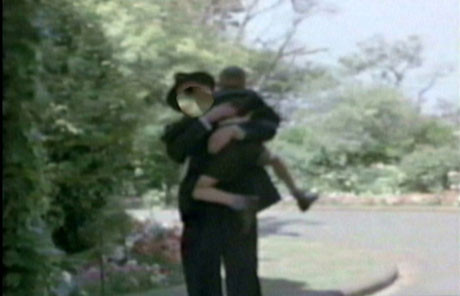 This is a press release for the first exhibition of art work by my son, William Pope.L, at Catherine Bastide Gallery in Brussels, Belgium.
The works in this exhibition borrow from many media: pink liquid antacid, changing stations, miniatures of monuments to the future, mattresses, children's clothing, fish tanks, drawings and video. Most of the work was made in 2008 but a few special works date from 1998 and 2002.
The theme of the exhibition is not innocence. The theme is my son's lack of trust. It could only be this because even as a child he was a gnasher and a biter. He was a gnasher and a biter then and he is a gnasher and a biter now. Ask his mother. Yes, people, like my son, have a difficult time with purity.
For example, my son believes that ideas such as 'childhood' and 'future' are sentimentalized. He believes that we valorize these concepts by emptying them of uncertainty. He believes the real power of these ideas are their inherent emptiness, not the emptiness we impose. The emptiness we impose is cheap, polite, and apolitical.
I do not agree with my son but he is my son and so I recommend him without reservation.