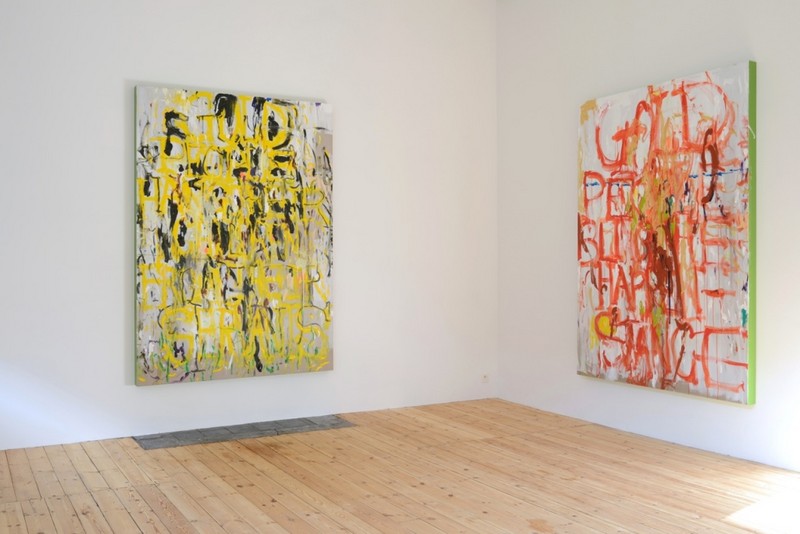 Pope L.’s new exhibition at Galerie Catherine Bastide Gold People Shit In Their Valet, titled after one of the new paintings featured in the show, will present five large-scale paintings on canvas and twenty smaller ones on paper closely related to the artist’s Skin Set Drawings project (1997-ongoing). The Skin Set projects visual, gestural and aural ambiguity. Skin Set was begun in 1997 with declarative sentences riffing for example on racist affirmations about black people (“Black People Are The Root Of All Evil”) and continues today with various other colors assigned to people and absurd, poetic sentences that are intelligible yet not reducible to a simplistic meaning. The paintings are titled after the text inscribed on them, the larger paintings referencing Gold People and the smaller referencing Gray People. In a short video interview for the Whitney Museum1, Pope L. says the Skin Set project was created “to interact with language at the level of the mixed message, where people say two or three things at the same time.” The paintings in Gold People Shit In Their Valet bear slogan-like text that is at times decipherable, and at others obscured by the gestural abstraction of the paint.

Some paintings show words that are clearly decipherable yet unintelligible, such as Gold People Blue Movie. The text is inscribed in pink lettering with light orange and paler pink accents over white paint on the top half and raw canvas on the bottom half, while a blue downward curved line underscores the word “blue” over the white background; a green shapeless brushstroke inside the curve of the “G” accentuates the top half whereas a yellow dot placed where white paint and raw canvas meet on the lower right side balances the composition. The painting’s description indicates that the paint hues being used are “flesh pink and white” on canvas, a nomenclature clearly ignoring the billions of people whose flesh is neither pink nor white – especially Gold People.

Elsewhere are puns that work visually but not aurally. For example, the viewer of Gold People Shit In Their Valet, will recognize “valet” is the visual cousin of “wallet,” but then realize another painting in the series is Gold People Shit In Their Vale. These visual puns, while present in the title, are not clearly legible within the painting; on the contrary, they belong to paintings where the overall effect is closer to gestural abstraction, as is the case with the two other paintings in the Gold People set. The same variations can be observed in the smaller paintings on paper, with Gray People Peonie or Gray People Smell Like The Universe veering toward almost total abstraction. Pope L. states that his “primary interest is the gestural aspect of language as enunciation, as performance, intention and desire.” Here traces of the body’s action on language present in the physical act of painting blur the already ambiguous and absurd message, the humor present in the words often deformed by pictorial gestures.
Additional objects such as Skin Set T-Shirts and Skin Set In A Bottle will be displayed on specifically designed banisters made to interfere with the space and disrupt the visitors’ view. The bottle labels of Skin Set In A Bottle reference the colors of the Belgian flag and sport the mottos “Belgium Are Nice” and “Belgium Are Lice,” revealing Pope L.’s “mischievous way of conflating commodity, language, nation and abstract expressionism into one container.”

Pope L. was born in 1955 in Newark (NJ), he lives and works in Chicago. Self-dubbed “the friendliest black artist in America”, Pope L. is a multi-disciplinary artist whose practice includes performance, video, sculpture, installation, paintings and drawings. His work has been exhibited or performed at the Museum of Modern Art in New York, The Whitney Museum in New York, the Museum of Contemporary Art in Los Angeles, the New Museum in New York, and the Renaissance Society in Chicago. The Renaissance Society and the University of Chicago Press have recently published Showing Up To Withhold, a monograph documenting his 2013 exhibition Forlesen at the Renaissance Society.
www.catherinebastide.com