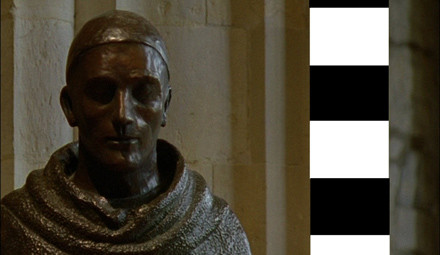 Charlotte Prodger works with writing, 16mm film, audio tape and sculpture, utilising their material properties as strict limitations and playing on the tensions between each form. Prodger uses the nexus of language and technology to create puzzles, slippages and cross-association.

Through the trope of queer subjectivity, much of her work has sought to recontextualise the historical forms of minimalism and structural film. Her solo show, handclap/punchhole (Kendall Koppe Gallery, 2001), orbited two disorientating optical devices: Sherborne Abbey’s mirror-trolley which enables visitors to view the ornate medieval ceiling without straining their necks, and Tony Conrad’s seminal 1965 minimalist film The Flicker. Prodger sought to contrast the Reformation’s stripping away of excessive ornamentation with the supposedly subject-less surface of minimalism.

With writing as the starting point of her practice, Prodger often uses anecdotes casually collated over the years, transmuting them to create cross-pollinating strands of subcultural oral histories. While handclap/punchhole set up a friction between image and sound, White Company/Russian Rings (at CCA as part of the 2011 group show What We Make With Words) explored the interplay between written language and mute objects. Prodger abstracted coded ideograms which were worn as finger tattoos by the thief subculture in Soviet Russia into 3-dimensional interpretations which were jet-cut from granite and placed atop a large sheet of text, a collection of personal anecdotes about shoplifting. The granite objects had a dual purpose: as semiotic substitutes for the anonymous identities in the text, and as paper weights. White Company/Russian Rings explored the Paleolithic relationship between language and matter - how words formed out of the necessity to name tools.

For her solo show at Intermedia Gallery, Prodger presents a new investigation into the tension between language and material, using the space as a conduit through which to read and write the object.
www.cca-glasgow.com