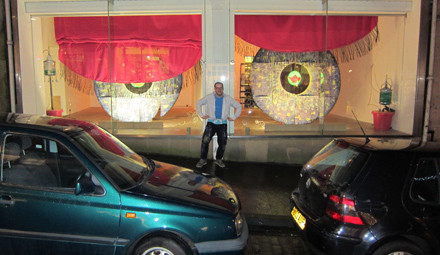 Since graduating from the Master of Fine Art programme at Glasgow School of Art in 2010 Oliver Braid has spent the last two years “aiming to advance as an artist who uses practical tactics to handle the study of happiness”. His large-scale ‘project’ style artworks, incorporating multiple collaborations and layers of interpretation, were composed following the structure of a GCSE Science Experiment handbook; beginning with a basic hypothesis and rationally following this through to reach a conclusion. In doing this Oliver hoped to discover the impact of art-making on human relationships and the impact of human relationships on art-making.

For this new exhibition at Intermedia the artist will present works produced in the wake of realisations that his over-rational methodologies were irrationally frustrating his original intentions. It marks a reflective stage in Oliver’s practice with a dramatic desire to change his attitude to both art-making and human relationships.

Oliver Braid is an artist living in Glasgow. Born in 1984, he studied at Falmouth College of Arts and Glasgow School of Art. He has recently exhibited I’ll Look Forward To It at Collective, Edinburgh as part of their New Work Scotland Programme (2011) and My Five New Friends, his first large scale solo exhibition, at The Royal Standard, Liverpool (2012).

Throughout 2012 he co-hosted a weekly pop-philosophy radio show with the artist Ellie Harrison, the Ellie & Oliver Show, through CultureLab Radio, Newcastle. As part of the Ellie & Oliver Show in 2012 he co-presented five special radio shows for Edinburgh Art Festival and co-curated a radio mini-festival for Glasgay. He was a founding member of the experiential therapy group for artists, Artists Anonymous.

In 2013 he has been invited to undertake a four month production residency at Triangle, Marseilles, sponsored by Patricia Fleming Projects.

Paul Kindersley was commissioned to produce the following films in response to some of the objects in the exhibition. Please note that the following links contain scenes of male nudity.
www.cca-glasgow.com