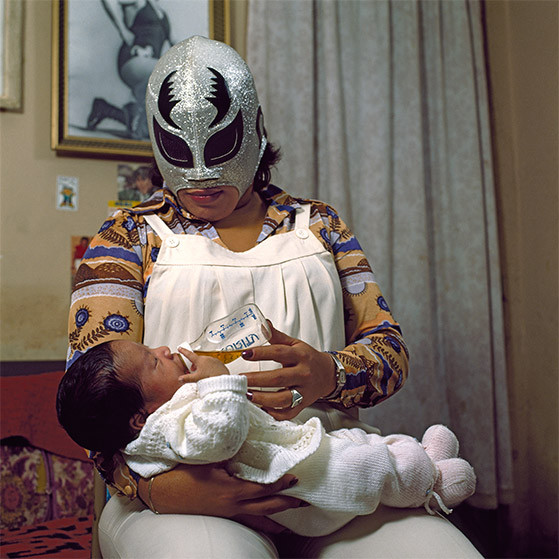 Over the course of 30 years, artist Lourdes Grobet has explored in depth the world of what is a deep-rooted tradition and one of the most popular sports in Mexico, which forms the basis of a social phenomenon that is unique worldwide: Mexican lucha libre wrestling. The photographic project being presented by the CCCB unfolds beyond the wrestling rings and takes a closer look at the homes, family meeting places and the celebrations of men and women wrestlers. Lourdes Grobet offers her special view of this manifestation of Mexican popular culture, whose origins date back centuries, being associated with rituals, linked to theatrical performances and deeply identified with social phenomena of the present day.

Lourdes Grobet (Mexico, 1940), works on her projects using various media, from photography through image in motion to performances. A large part of her photographic work is marked by transgression, humour and provocation; she is an enemy of delicacies and, in the midst of paradoxes, she always tries to seek a combat position: to look at the view of those nobody listens to. She does not seek to produce images suitable for any fashionable discourse: "I don’t need to understand why I take photographs. I have always been clear about why I work on a project."

Her work has been exhibited worldwide, at the Silverstein Gallery in New York, at the CECUT_Centro Cultural Tijuana and at the CFMAB_Centro Fotográfico Manuel Álvarez Bravo in Oaxaca (Mexico), at the Casa de América and at the Galería Xanon in Madrid, at the International Festival of Pingyao (China), at the Quai Branly Museum in Paris, as well as numerous galleries in Germany, the Netherlands and the UK. In the 1960s and 1970s the student movement, and as a consequence feminism and group art, made their presence felt in her work. She defines herself as daughter of the teachings of Mathias Goeritz, of Kati Horna, of Gilberto Aceves Navarro, and of El Santo, the most paradigmatic character in Mexican lucha libre wrestling.

The exhibition being presented by the CCCB consists of a previously unpublished series of over forty large-format photographs complemented by the screening of material from the artist’s extensive photographic collection on the theme. The exhibition also includes a mural intervention by Miguel Valiñas and pieces by Félix Blume, a French artist who collaborates with Francis Alÿs on artistic sound projects. Additionally there will be daily screening sessions of films from the 1960s and 1970s, now cult material, featuring El Santo.

Also planned is the distribution of the photo book Retratos de familia, Lourdes Grobet; editorial RM, with editions in Spanish and English.

In parallel with the exhibition, MXaBCN _ International Festival of Mexico in Barcelona is organising an intense programme of multi-disciplinary sessions at different CCCB venues, throughout the day on Sunday 25 October.
www.cccb.org