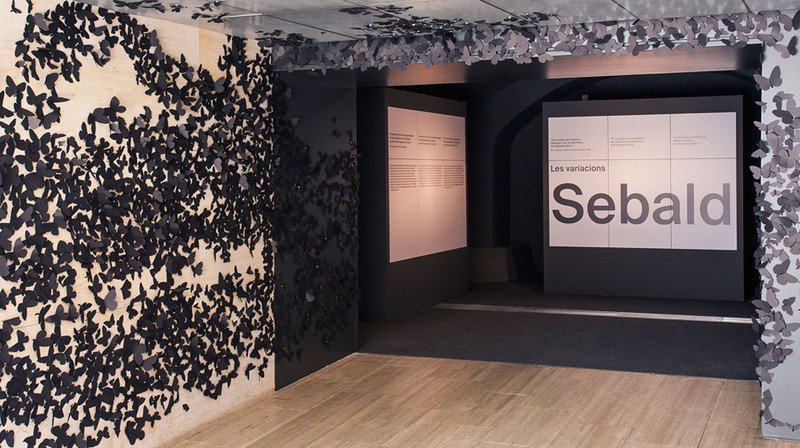 The exhibition is a conversation between art and literature. It takes as its starting point, the work and the figure of the German writer W.G. Sebald (1944-2001), the author of some of the key books of the turn of the last century, such as The Rings of Saturn and Austerlitz. «Sebald Variations » recreates the dialogue between Sebald and renowned artists and writers who have been invited to take part in the project, such as Carlos Amorales, Susan Hiller, Taryn Simon and Trevor Paglen. It will also be presenting new pieces by Jeremy Wood and Andrea Geyer, which have been specially commissioned by the CCCB for the exhibition.

The CCCB is organising the exhibition “Sebald Variations” in which the German writer and author of some of the key books of the turn of the last century will become the linking thread in questioning the history of the 20th century and its impact on the 21st century.

W.G. Sebald remains in limbo. His premature death in a car accident in 2001, just when his works were beginning to receive widespread acclaim, canonised him. However, he hasn’t let himself be embalmed, nor has he disappeared. Sebald remains very much alive. His books still attract readers because the questions they asked still have to find their definitive answers. Sebald continues to question us about memory, history, literature, art, the contemporary.

His works, written in the German of his childhood, are nostalgic, evocative, a hybrid of images and texts, as well as a hybrid of travel writing, novels and essays. They are autobiographical yet interested in collective history. Profoundly poetic, they explore most of the great themes of the 20th century: migrations, individual memory, historic discourses, political violence, trauma, the figure of the author, travel, tourism, memory maps, intertextuality, archives, documentaries and art and literature as ethical instruments of restitution.

The exhibition “Sebald Variations” seeks to introduce a critical reflection, and recount the different ways his work has influenced and engaged in a dialogue with the visual arts and literature since his passing in 2001. The exhibition examines the way several conceptual strategies for using images with texts, for historical reflection, for the unexpected juxtaposition of scenes and narrativity as a whole, not only appear in Sebald’s work, but have, on countless occasions, been directly or indirectly alluded to and even included in the works of a number of artists. The exhibition takes into account the different exhibitions, publications and artworks associated with Sebald that have been produced since 2001, or which enter into a dialogue with his books, in order to look at his ongoing impact on the artistic endeavours of today from a new perspective.

The project has been conceived as a visual and textual essay that brings together the voice of the author and other creators working in different fields. It pursues Sebald, comments on him, prolongs him and draws him out of himself in order to create new proposals in his company.
www.cccb.org