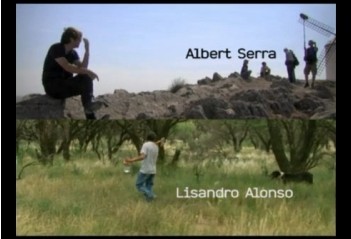 The exhibition The Complete Letters features epistolary works defined by cinematographic creation. This is an experimental communication format used between pairs of film directors. Although each director is situated in a location geographically distant from that of their partner, they are united by their willingness to share ideas and reflections on all that motivates their work. Within this space of freedom, the directors featured in the exhibition examine their affinities and differences, within an environment of mutual respect and simultaneity of interests and with notable formal variants established in each of the correspondences.
The works that we present in The Complete Letters constitute an innovative cinematographic format, where filmed ideas are exchanged between great dyads of filmmakers: José Luis Guerin (Barcelona) and Jonas Mekas (New York); Isaki Lacuesta (Girona) and Naomi Kawase (Nara); Albert Serra (Banyoles) and Lisandro Alonso (Buenos Aires); Víctor Erice (Madrid) and Abbas Kiarostami (Teheran); Jaime Rosales (Madrid) and Wang Bing (Shaanxi); and Fernando Eimbcke (Mexico City) and So Yong Kim (Pusan/New York).
This exchange of video-letters responds to a reality: a filmmaker’s homeland is being on the same wavelength as other filmmakers around the world. In this film continent, creators always pay attention to works by others. The simultaneous and juxtaposed presentation of these filmed correspondences in a single exhibition area provides a space for dialogue and reflexive intimacy.
www.cccb.org