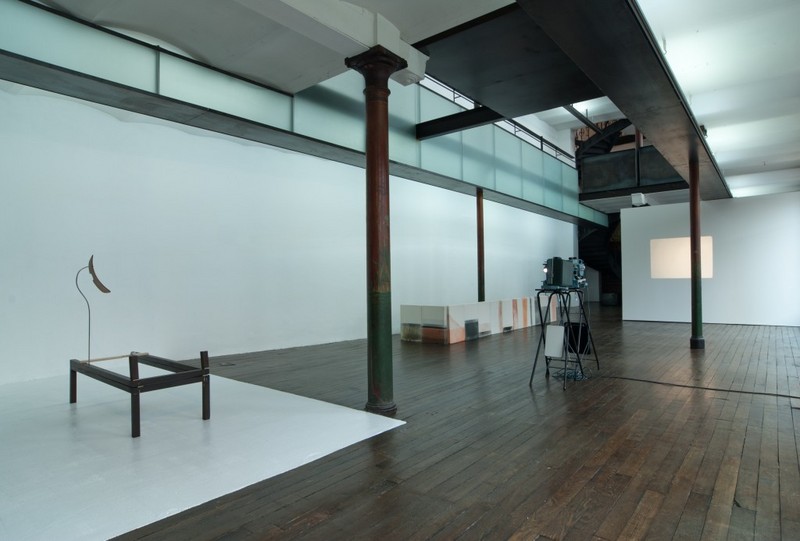 n German the term Doppelgänger means « a double », while leaving a lingering doubt as to the figure’s reality: the Doppelgänger is identical, but does this mean it is separate? Moreover, there is no indication of how this second self is generated. It is not an outcome, an end in itself: it is a mode of production of the work of art, of our hidden lives, of the human world perhaps. Endowed with an uncertain mythological dimension, the Doppelgänger is fundamentally romantic and literary: the recommencing it involves has the particular characteristic, in relation to the classical notion of the double, of being internal. The interior aspect of the phenomenon of splitting leads the individual to consider himself as something other, while remaining himself. Necessarily experienced privately, this dissociation effect is quite common, at least to a limited degree and sometimes to the point of breakdown. Thus the Doppelgänger fluctuates between being a figure of destructuration and a universally shared structure.
As an almost personified process, the Doppelgänger is the cause of the clashes making up our psyches, our subjectivity. The Doppelgänger exists only in solitude: not in a fully achieved repetition, but, on the contrary, in an unfinished, impossible, endlessly postponed reiteration culminating in neither otherness nor sameness. This «disquiet » provides forms, which may be a sign or an image of itself. The question of what those signs are is quickly answered – art, literature, conquests, disasters – but what of the images? For the Doppelgänger is an overlaying of contradictory operations: dissociation as much as splitting-off, a combination of operations that are similar but opposed in terms of their modus operandi, and yet coexistent. Might it be that works of art are its image? And that exhibitions strive to give an account of this?
The three-exhibition Doppelgänger cycle will bring together several possible versions of the phenomenon. The exhibitions represent three hypotheses regarding its modes of formation and existence, which cannot be imagined, deconstructed or induced. We must follow them, then, as if they were guides, picking up their written traces: for perhaps only the succession of sentences – time – can give an account of them.

Thus the works will be an echo, a reflection of texts we shall try to follow for their ability to provide the clue – rather than the proof – to the existence of the Doppelgänger in all his secret forms: Pasolini’s unfinished novel Petrolio, W.E.B. Dubois’ The Souls of Black Folk and Claude Simon’s The Georgics. Ultimately they will leave us feeling lost, but beforehand these writings will enable us to address the issue via the practice of various distinctions – separation, splitting, multitude – which will never outlive their status as hypotheses, for very quickly each of these operations will summon up the others. The exhibitions The Separate (10 November 2012 – 6 January 2013), The Souls (9 February – 28 April 2013) and The Georgics (29 September – late December 2013) will use them as a scarcely hidden underpinning, a framework to be read.

Pier Paolo Pasolini died leaving behind him almost 600 pages of an unfinished roman-fleuve he saw as running to 2000 pages. In an interview in Stampa Sera of 10 January 1975 he spoke of it as a compendium of all his experiences and memories. This ultimate work is at once mythological - « My story is not a story but a parable »; everyday – the project was inspired by a political/financial/oil industry scandal, and Pasolini draws directly and extensively on the press of the time; aesthetic and political – his concern about the return of fascism in the consumer society goes hand in hand with the invention of new forms of writing; literary and cinematic – excerpts from Dostoievsky’s The Possessed are included word for word, and the work was written while he was making A Thousand and One Nights and Salo, or the 120 Days of Sodom; and novelistic and critical – he had decided « not to write a story, but to construct a form. » Drawing on the distinction made by Russian Formalist Victor Shklovski, his novel is not, he says, linear like meat speared and cooked on a skewer, but a « swarming» : the point is not to create a succession of episodes, but to throw episodes together and give birth to something which, given the book’s multiple, polyphonic character, will be closer to poetry than to any strictly novelistic form. To achieve his purposes, Pasolini resorts to dividing his hero, Carlo, in two. A crucial « disorder » factor, this binary separation is followed by a host of similar occurrences, among them several changes of sex by one of the two characters.

Clearly, then, the Doppelgänger is not a matter of temporal recall, of a copying, of the game of the return of forms. It is not an outcome, an end in itself; it is a mode of production of the work of art whose existential, experiential aspect is constantly reasserted.
Echoing Antonin Artaud’s famous declaration, « I am separate », the exhibition The Separate will set out to evoke the figure of the subject and of a possible originary duality often experienced as a rending and as a factor for disturbance as well as for novelising: a double born of a scission, incompletely other. A movement the work records or transmits, even as it is permeated by it. The works making up the The Separate exhibition are, like Claire Fontaine and Karl Holmqvist’s neon piece Untitled (The Weeping Wall inside us All), which will be present in all three exhibitions, are the clue, the narrative, the account, the still palpable effect of this movement. Whether images of the very act of separation (Cécile Dauchez), of possible mental or psychological structures (Koenraad Dedobbeleer, David Lamelas), or of effects of this primordial separation (Bruant & Spangaro, Corin Sworn, Toshio Matsumoto), the works have in common neither medium nor subject, but rather a paradoxical structure: an endlessly ongoing separation that no suturing can draw together, yet which will never become final.
www.ceaac.org