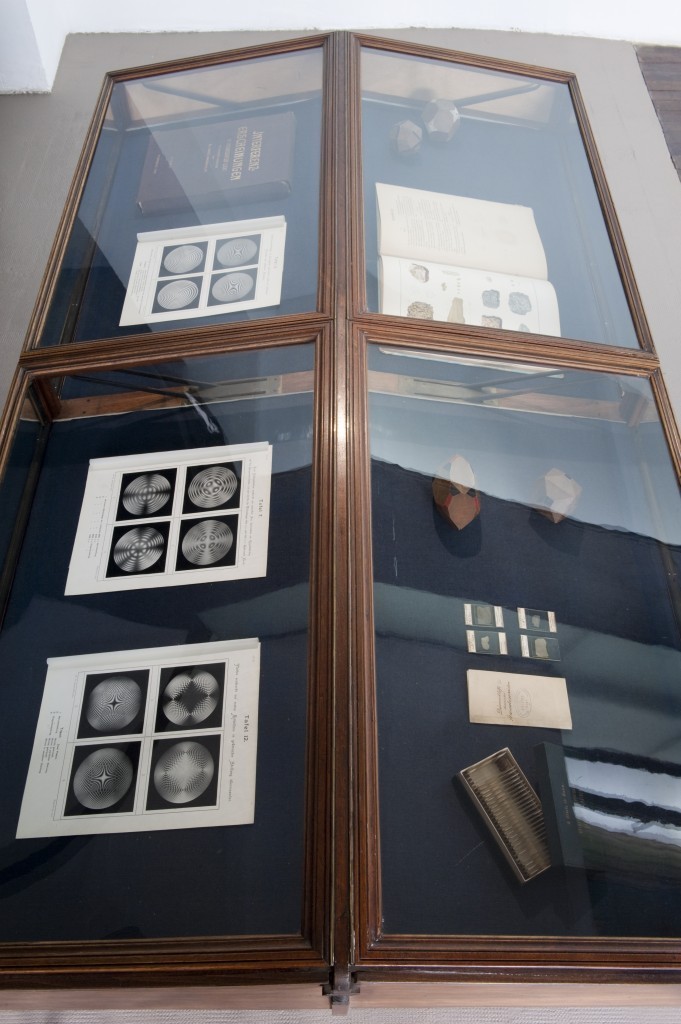 The idea for the »Éclats« exhibition arose last summer after a visit to the Museum of Mineralogy at the University of Strasbourg.1 The current exhibition thus spans two locations: the Museum of Mineralogy, where a number of artworks are on display; and the CEAAC, where a selection of museum objects (including mineral samples, models and a geological map) are juxtaposed alongside works by participating artists. To maintain the museum’s unique and timeless atmosphere, the exhibition scenography is deliberately understated and restrained. The visitor encounters the objects incrementally, displayed in the showcases and on the walls of the historic premises.

Museum of Mineralogy
Alicja Kwade’s Pariser Bordsteinjuwelen are ordinary pebbles collected by the artist, polished and beveled in classical faceted designs. They are displayed in the museum alongside a historical counterpart: a box of synthetic gemstones dating from the nineteenth century, originally used as instructional materials to demonstrate a variety of gemstone cuts.

In addition to samples of minerals, the museum collection also houses a large number of historical instruments once used to analyze and measure rock samples, including goniometers, microscopes, x-ray devices, and an electron diffraction device. However, one of the current displays – Evariste Richer’s Killing Time – features a device seemingly more at home in a faculty of medicine. In this work, a differential blood cell counter is set to the number »376,« which indicates the number of garnet crystals visible on the surface of the mineral. As such, the work joins the scientific method to the contemplation of intense observation.

The second hall in the museum features Mémoire Interlope, a series of photographs by Mariana Castillo Deball depicting minerals from the Roger Caillois collection at the Museum of Natural History in Paris. The striking motifs have been cropped and positioned against a brightly colored and equally dramatic background, which is no longer perceived merely as backdrop, but rather serves to enhance the abstract quality of the objects that have been removed from their natural environment and subjected to a process of grinding and polishing.

The twenty lumps of copper lined up in a display case in Yuri Leiderman’ Stockholm Project. Names of Mountains are evocative of scientific experimentation. Ten of the nuggets embody unanswered letters Leiderman wrote to Jeff Koons and the Duchamp-specialist Ulf Linde, amongst others. In 1996, Leiderman and an actor recorded a reading of the letters in Russian, English and Swedish. Using a specially-prepared copper solution, the acoustic signal triggered an electrolytic process to form a series of strange yet seemingly organic lumps of copper. Using a similar technique, the ten remaining copper nuggets date from 1998, and represent ten European mountain ranges – the Alps, the Pyrenees, the Apennines, the Carpathians, the Balkans, the Rhodopes, the Black Forest, the Jura, the Ardennes, and the Tatra.

CEAAC
The surveillance monitor in the CEAAC reception area displays a storage room in the Museum for Mineralogy, which houses a collection of models and instructional materials belonging to the university. Part of Gaëlle Boucand’s Permanent Loop (Natural History II), the work is suggestive of the unique temporality of the museum space as a closed system while also eliciting the anticipation of an intervening event.

The exhibition commences with what might be termed a visual illusion: Hubert Duprat’s Untitled, which features four large-format photographs depicting symmetrical structures created by a wave-like motif. On closer examination, the symmetrical motif, reminiscent of the patterns on a cleaved surface of agate, is revealed as too complex to be organic in nature. Each of the four images is created by four separate photographs, which are then extrapolated in four different configurations. The work is based on a single exposure, taken by the artist in a room with a glass façade covered by a black plastic foil. The daylight entering through the wave-like slits in the foil casts a strange and artificial glow reminiscent of neon light.

Nature and artifact are also themes of Entropology I, a video by Mariana Castillo Deball. The film is the account of a mineralogist – a researcher at CERN in Geneva – who creates synthetic stones to perfect her garden, which she designed to represent a mountain landscape in miniature. In scientific discussions with her colleagues at CERN, the researchers reflect upon the nature of order and chaos as well as the possibilities and limitations inherent in human imitations of nature. Claude Lévi-Strauss’s notion of &raqou;entropology«, a concept that links anthropology with the study of entropy, forms another central theme in their reflections.

The cylindrical sculpture Cristaux de pyrites by Hubert Duprat was created using cube-shaped pyrite crystals. The surface of the artifact emerges from the logic of the material itself, with an uneven exterior juxtaposed against a completely smooth interior. The work also embodies the physical properties of the material, which has a tendency to shatter into smoothly surfaced, cubed fragments. Although these fragments at first glance appear joined together with almost effortless ease, the cylindrical form is actually the outcome of a laborious process of assembly.

From the 1980s on, Sigmar Polke created a number of photographic series using minerals, including one series that experimented with radioactive rocks. In one work, the mineral was placed directly onto the photographic plate, with no additional illumination. Another work utilized shavings of meteorite, formed into circular shapes reminiscent of galaxies and then photographed. The series Untitled dating from 1986 features nuggets of gold captured by the techniques of macro-photography. In magnification, the nuggets assume a grotesque shape whose origin is nearly impossible to identify.

Evariste Richer’s Fulgurite similarly reveals what is normally invisible to the naked eye. Fulgurites are created when silica is melted by a lightning strike on sandy soil. The neon tube inserted into the fulgurite illuminates the glassy interior, causing the normally nondescript fulgurite to glow and assume corporeal structure.

Due to the digitization of research archives, microfiche technology was briefly regarded as obsolete. However, it has since been realized that data stored on microfiche can survive intact for 500 years, a feat heretofore unmatched by digital media. As a result, digitized data is now being transferred back to microfiche. In Gaëlle Boucand’s 500/500 000 000, a microfiche displays 80 photographs of minerals. Dating back 500 million years, the samples stem from the mineralogical division of the Museum of Natural History in Paris.

Gyan Panchal’s cohrl sculpture is an artificial drill core produced in collaboration with students at INSA (Institut National des Sciences Appliqués) in Rouen. Made of several polymer compounds, the cylinder features both transparent and accreted zones to embody what the artist has termed a »fictional evolution«. An untitled work dating from 2010 also makes visible the hidden traces of an earlier machine processing: in this paper rubbing, the surface of a coarsely machined slab of white rock, originally found in a quarry, is discovered to reveal a random motif reminiscent of an antique drapery.

The notion of the splinter – one of the definitions of the French title of the exhibition – metaphorically undergirds Gernot Wieland’s Planeten und Kristalle, an installation featuring objects made of materials such as burnt wood, paper and soap. The work alludes to Sigmund Freud’s conception of the human psyche as a crystal that has shattered into a thousand pieces. Each of the fragments of the psyche preserve the crystalline structure of its entirety, with both the work of psychoanalysis and art entailing an effort to draw generalizations from the part to the whole. The exhibition opening featured a lecture by Gernot Wieland titled »Depression in Crystals«, which drew upon a variety of biographical, scientific and historical sources.
www.ceaac.org