I learn by osmosis 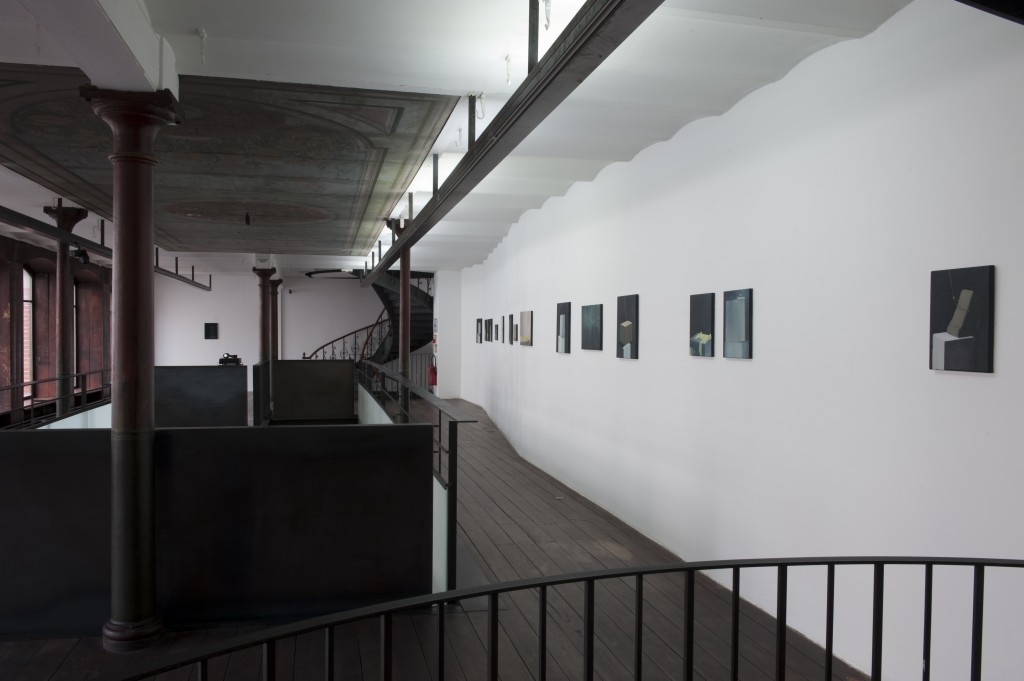 »Painting a block of clay and adding something to it«: this is the premise Ivan Seal has imposed on himself as the starting point for a new series of works which he began about a year ago. The paintings from this series represent sculptures, or at least sculptures in the making. Their material presence is manifest: blocks of clay in various sizes and formats sitting atop pedestals, some thrust in a precarious position and barely kept in place by a string. Others are studded with matches, nails or cigarette butts. One of the blocks seems to be partitioned by three strings, but when trying to follow their course, viewers soon realise that they are stuck half-way, fastened at a highly improbable angle. Though crude and sturdy at first glance, the presence of this alleged sculptural matter is led ad absurdum by its surfaces and details. The fair-coloured lumps and pedestals are bathed in a cold neon light, standing out against an indistinctly black background. Despite the plainness of the material, the settings radiate an exaggerated artificiality, to the effect that the blocks of clay appear like malleable primeval matter from which anything — from spherical forms reminiscent of marbles to organic, tube-shaped objects — could emerge. The use of painterly trompe l’oil effects such as drop shadows and modulated volumes further enhances their material presence, but the ambivalence effectively remains to the extent that they consist of nothing more than paint, colour and brush strokes.

For the exhibition at CEAAC, the artist first proceeded to select from among his body of work a number of existing paintings, for which he then painted ‘counterparts’ that reprise and variegate some of the originals’ features. The installation is rounded off by a sound piece with associative words spoken by the artist (‘it looks like a tower’, ‘on the pedestal’, ‘on the floor’, ‘a still life’, ‘a face made of matches’, ‘here is now there’...), from which a computer generates an endless poem. Echoing the variations of objects in the paintings, language is here used as a material subject to modulation. Seal thus constructs several levels of critical distance vis-à-vis the painterly gesture: defining a conceptual premise; selecting works together with the curator; painting their ‘counterparts'; linking them to language; and finally adding a computer that puts the words in a random order and thus triggers constantly new connections in the viewer’s mind. Quoting a novel by Franz Werfel1, the title of the exhibition, I learn by osmosis, succinctly sums up this process.
www.ceaac.org