Melody: Always the Art of Others 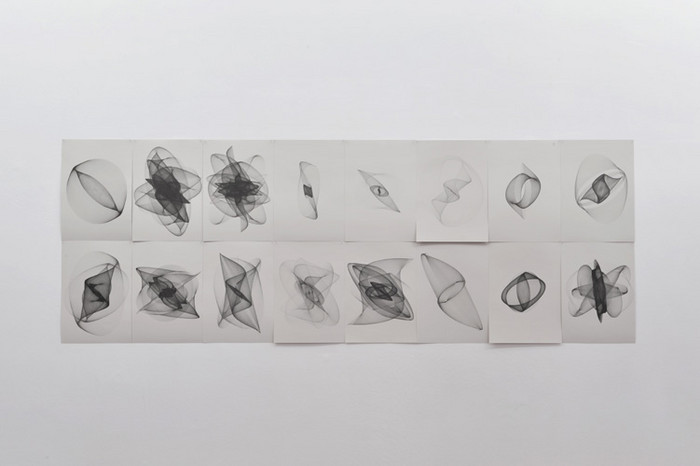 The title of the exhibition is a quotation from Ursula Bogner’s archive of index cards, where she recorded thoughts on such varying topics as marriage, orgone energy, music, short-wave radiation, and super-civilizations. The scientist, who worked in the pharmaceutical industry, expressed herself in these meticulous, typewritten short texts with a dry poetry, raising questions as essential as, »Is it possible to abolish the night?« As a musician—it has certainly been possible to call Bogner this ever since her spectacular posthumous discovery by the Berlin music producer Jan Jelinek—she distanced herself from melody, assigning it to others; this is astonishing, however, considering that melody does indeed play a role in the pieces released by Jelinek’s label faitiche.1 What we see of Bogner today has been filtered and influenced through Jelinek’s selection—besides music, there are drawings showing scientific illustrations with textual commentaries added, pictures from her photo album, as well as the short texts in the archive of index cards mentioned above. After many years of involvement with her work, he has attempted for the first time to reconstruct a slide installation: five slides of the images Supergranulationszellen (Supergranulation Cells), Lichtbogen Sonnenfinsternis 1980 (Solar Eclipse Arc 1980), Entdeckungsaufnahme Komet Halley (Exploratory Photograph Halley’s Comet), Magnetfeld (Magnetic Field), Aurora am Jupiterrand (Aurora on Jupiter’s Edge) were projected on top of one another using five slide projectors at different light intensities. In the exhibition, a poster showing film stills documents this installation, for which only timecode notations exist without any precise information on the transitions. All in all, the works from the estate only give a little information about the relative importance of individual elements in her oeuvre. This exhibition, which includes the performance Schleusen (Locks) on the opening night based on a score by Bogner, is thus only an attempt to interpret the works of this extraordinary artist.

Like Jan Jelinek, Nick Laessing, whose work is on display on the ground floor of the CEAAC, is interested in marginal phenomena from the history of music, only with around one hundred years time difference. Here, too, melody is »the art of others«, since Laessing’s works are reconstructions—or, rather, reinterpretations—of objects that were developed in the nineteenth century for the purpose of visualizing sounds and harmonies: the eidophones set up in the entrance area may be viewed as sculptures or else as devices. Only in the performance Voice Figures, on March 19, will they be activated by a classically trained singer, whose voice will cause organic forms to emerge on the eidophones’ latex membranes.
The devices used to construct Elective Affinities, an installation combining tuning forks and laser beams, make it reminiscent of an experimental setup from a modern laboratory. When the two vertically and horizontally oriented tuning forks are in perfect harmony, a circular laser beam is projected onto the wall.
In the large exhibition space, Laessing installed the work Spatial Harmonics to fit the architecture of the space precisely. During exhibition opening hours, the drawing machine is always started at 2 p.m. to create a drawing within four hours that is then hung on the wall at the end of the day. Over the duration of the exhibition, the harmonograph generates a temporal as well as spatial record in varying elliptical drawings, registering movements in the exhibition space, in a similar way to a seismograph, through, for example, the vibrations of the floor.
The works presented by Nick Laessing show three different techniques for visualizing sound: the representation of sound waves with collodion powder or watercolor paste, of two tuning forks in perfect harmony with a laser beam, and finally, the recording of a musical harmony in the oscillations of the harmonograph. Common to them all is that there is no direct contact from the artist on the respective medium. By constructing the apparatuses, he only creates the conditions for the development of the works.
Bogner copies from scientific publications, and photographs illustrations from books; Laessing reconstructs and has the machine draw for him. Authorship, appropriation, and artistic interpretation of scientific or pseudoscientific knowledge are therefore the central theme of the entire exhibition.

»It is no longer possible to rely on the immediate sound concept.« (U. B.)