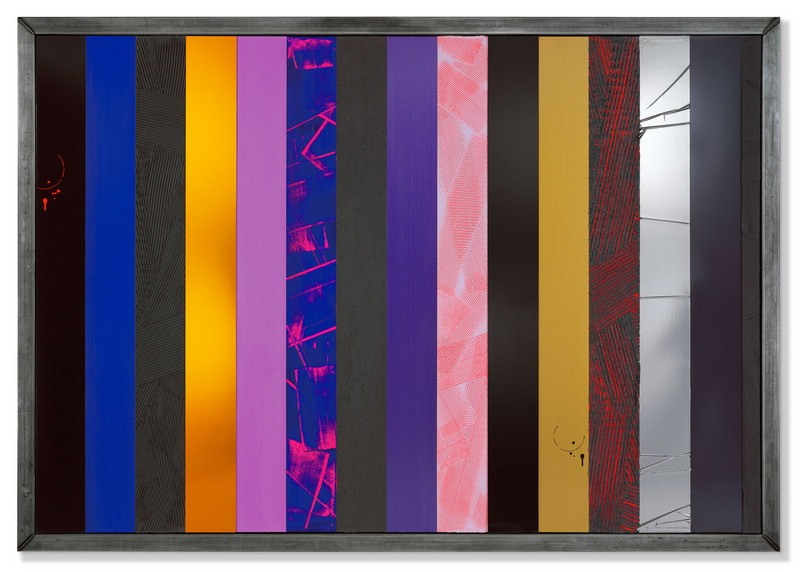 Contemporary Fine Arts is pleased to present the exhibition “Stripe Paintings”, showcasing works from the series between 2004 until 2012 by Anselm Reyle (*1970, Tübingen).

"Anselm Reyle starts out by following Andy Warhol’s recipe for success: give the people what they want. He uses it as a source of test samples for his artistic experiments, aimed at discovering hidden genealogies within and cultural imprints upon pictorial representation.

With his emphasis upon surface and effect, Reyle appears to be an artist who doesn’t really paint!?! In fact, every aspect of his work—formally and in individual cases also technically—traces back to painting. He combines painting, however, with an expansion of the concept of the readymade to include forms, colors, materials, styles, and painterly approaches. Reyle’s works are largely created with a team of studio assistants, but at the same time he insists on the use of painting techniques as an anachronistic stance toward the belief in progress and modern media. He smuggles painting in through the back door, as it were, and simultaneously frees it from narcissistic self-reflection. While the creation of an auratic artwork is an important element of Reyle’s practice, he exposes the process of creating the aura by extending the painterly aspect to include the displays that form part of the works. Reyle uses painting not to indicate the singularity of an artwork but to uncover buried pictorial or art-historical traces; as a participating observer, he digs these out like an archeologist looking for relics of the past, using painterly means and an artistic approach that involves emphatic mimesis as well as cool, ironic detachment.

Reyle’s use of surfaces and finishes that appear to have been industrially produced and recall minimal art objects above all enables him to zoom in on the modernist celebration of industrialization and highlight what lies right beside the legitimate art-historical strands of modern art, also including minimal art."

Excerpt from the text “Stripe Paintings” by Anna-Catharina Gebbers, from the catalogue of the same name, published by Snoeck on the occasion of the exhibition.