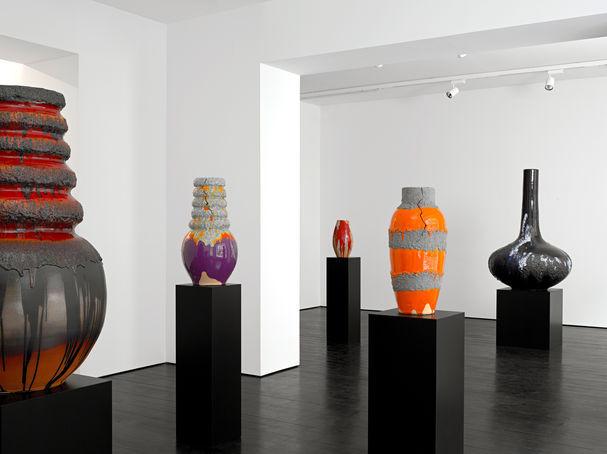 Contemporary Fine Arts is pleased to present the exhibition „KERAMIK” with new works by Anselm Reyle.

A solo exhibition in the new premises of Contemporary Fine Arts presents brand new work by the artist for the first time after more than two years. The exhibition shows a series of ceramics by the artist in different sizes, addressing the ill-reputed Fat Lava style, with intense colours and structurally accented glazing, forming a bond between sculpture and painting.

The vases are all handmade in the style of Fat Lava. This term refers back to a particular form of glazing that was developed in the 1960s and is reminiscent of the large pores found in solidified lava flows. These days, however, in professional circles, Fat Lava is now generally associated with West German ceramics from the 1950s to the 1970s, which are characterised by bold colours, striking glazes and experimental combinations using a great variety of forms. After the war, these pieces were for the most part industrially produced – an approach that emerged from the democratic desire for universal accessibility and simultaneously led to an ambivalent situation for the ceramic factories, which now focused on mass production rather than creating elaborate single pieces. Despite their simplified form, streamlined for industrial production, the vases stood out from other ceramics due to extensive research on new glazing techniques and bold colours, which were applied by hand. In addition to the primarily matte dark Fat Lava glazing, orange red, cadmium yellow and cobalt blue are among the colours representative of this style. Contrary to their former semi-industrial origins and short production time, the vases for Reyle's series were created in collaboration with traditional ceramic factories, due to their size and in some cases highly sophisticated processes.

A notable feature is that all the vases have cracks or deformities in the body or neck. Impressed by Japanese ceramics and the philosophy behind them, Reyle appropriated their appreciation of defectiveness. In accordance with the tradition of Kintsugi, a crack or fracture is no reason to discard a piece – rather, it is to be appreciated and preserved in its imperfection. Such flaws are even emphasized. Reyle staged these accidents intentionally, handling the vases before firing them and inflicting almost exaggerated cuts, dings and dents. This can be seen as an example of Reyle's conscious approach with imperfection. It recalls Reyle's now-trademark splotch, which at the time was applied like a signature to his – especially perfectly executed – stripe paintings.