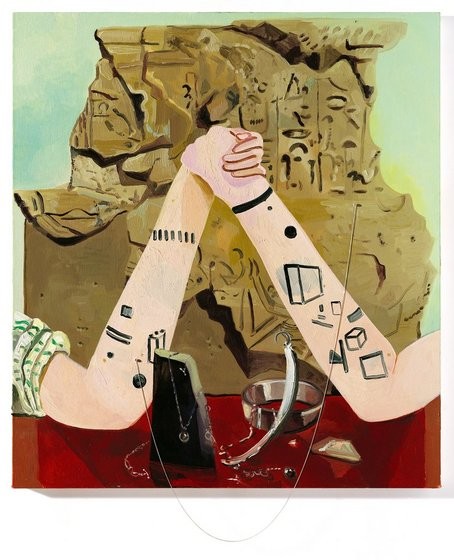 Since the day Dana Schutz received her first oil paints from her mother at age 15, the exuberant imagination of the artist, born in 1976 in Michigan and now living in New York, has been limitless. Dana Schutz' range of whimsical themes and unique visual inventions encompasses everything from portraits of imaginary 'ideal' life partners for her single friends and the invention of the figure Frank, the last survivor of humanity (with only herself as the last painter at his side) all the way to the self-eaters, creatures that consume and create themselves anew.

For her first exhibition with CFA in 2005 - Teeth Dreams and Other Supposed Truths - Dana Schutz, inspired by the recognition that 'fact and fiction in American politics and culture have been getting incredibly blurry', turned to real figures of today. There, among other things, she sent Bill Gates to the jungle for a holiday, killed off her despised landlord, and placed Michael Jackson on an autopsy table. Nonetheless, Schutz does not mock her protagonists. Honest empathy for those she paints and their situation is a fundamental characteristic of her work.

For the thirteen paintings of her current exhibition If it Appears in the Desert, Dana Schutz engaged with the art historical genre of the still life, whose classic definition she expands considerably. For Schutz also arranges her human protagonists like elements of a still life or a 'frozen moment', as she puts it. As for example in Singed Picnic or Singed Still Life, where she adds a human bust to the usual attributes of a still life: fruits and a bottle on a tray. But what happened with the objects on the tray? Bottle, fruits and bust are broken apart or singed and turn out to be merely empty shells. Dana Schutz explains that she wanted to show a scene where something happened to some of the objects and characters that took place on the right, outside the frame of the picture. At the same time, the artist plays with the illusionistic three-dimensionality of the two-dimensional medium of painting. In the work Accident, the artist goes one step further towards three-dimensionality. She cuts a hole into the canvas and puts black velvet behind it. The hole seems like an absence, 'as if something terrible happened to the picture'.


The reference to events that take place outside of the painting is a leitmotif of the works in the exhibition. What happened in the barricaded apartment of the Jesus freak in Worship Channel? Was only a fish filleted on the bloody sheets? And what is behind the red boot and the broken glasses that are strewn across the street in Boot? The visual space of the painting gives hardly any clues, because the artist locates her scenarios in indefinable spaces or better non-spaces that hover between reality and its representation. The woman in skin-tight Distressed Jeans actually exists only on a poster. The man with the blindfold in Shooting in Natural Environments, reminiscent of De Chirico's metaphysical paintings, who has a gun aimed a this head, imagines himself to be in a cosy interior which however stands in the middle of a harsh wasteland. And even the plants in Historical Reenactment with Plants grow not in soil, but instead as decor on a sheet - we can only guess what it hides.

Dana Schutz does not prescribe any answers to the numerous questions her paintings raise.