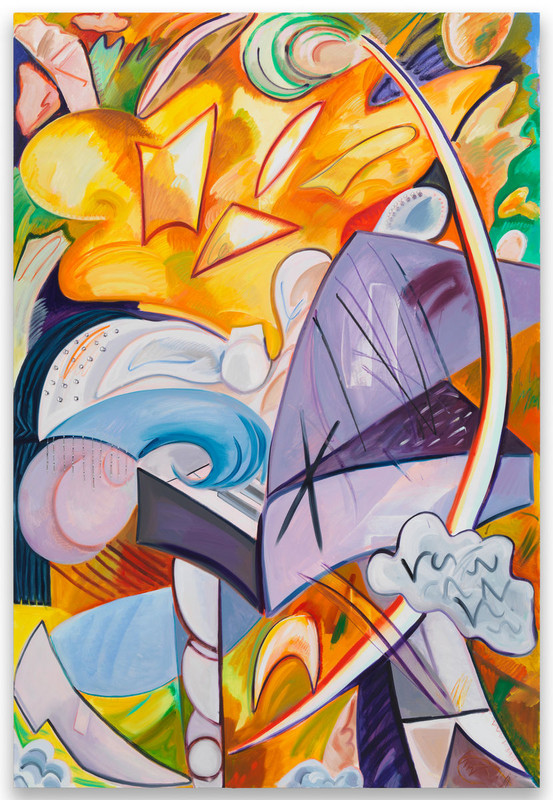 Contemporary Fine Arts is pleased to present the exhibition God Paintings with new works by Dana Schutz (*1976 in Livonia, USA).

Dana Schutz’ expressive and vividly coloured paintings unite reality and fiction, humor and horrors, inventing both imagery and hypothetical situations. In her most recent paintings, Schutz continues to question the ability to represent the impossible by investigating the subject of God; or rather what the form of God might look like without any preconceived connotations or symbolisms. “I’m not particularly religious”, she says, “but I was interested in God as a representational problem. When I was a kid, I thought God was a cross between Bob’s Big Boy—a restaurant chain I used to go to in Michigan where I’m from whose mascot is a chubby character with a pompadour—plus that really horrible Ray Charles–inspired big-head moon character from a 1980s McDonald’s commercial, and probably Liberace, all somehow mixed up in this pop-culture soup. But that’s really what I thought was up there in the sky—in orange, somehow without a perimeter. And maybe that’s the problem with trying to depict a thought: It doesn’t have an edge.“

Schutz describes her painting process as a sort of rehearsal, “where muscle memory is involved. It can almost be like building a house, where the series of marks are laid one on top of the other; if one mark doesn’t sit right, I’ll rebuild the whole thing from the bottom up. Or the process can feel like dancing, where there’s a rhythm – a physical call and a response.”

The God paintings may be read as portraits yet the artist’s approach to them is akin to making an abstract painting, where the construction of the subject is inextricable from the construction of the painting. “In this way the subject takes up much of the space within the canvas, and the painting is treated graphically, as a vertical field in which to act” the artist explains.

Dana Schutz was born 1976 in Livonia, Michigan, and lives and works in Brooklyn, NY. Her work has been exhibited both in the United States and abroad, including solo exhibitions at the Denver Art Museum, the Miami Art Museum, The Neuberger Museum of Art in New York, Atlanta Contemporary Art Center, and the Museo d’Arte Moderna e Contemporanea di Trento e Rovereto, Italy.

Her most recent exhibition just opened at the Hepworth Wakefield in the United Kingdom. A survey of recent paintings will be presented at the Kestnergesellschaft Hanover next summer.