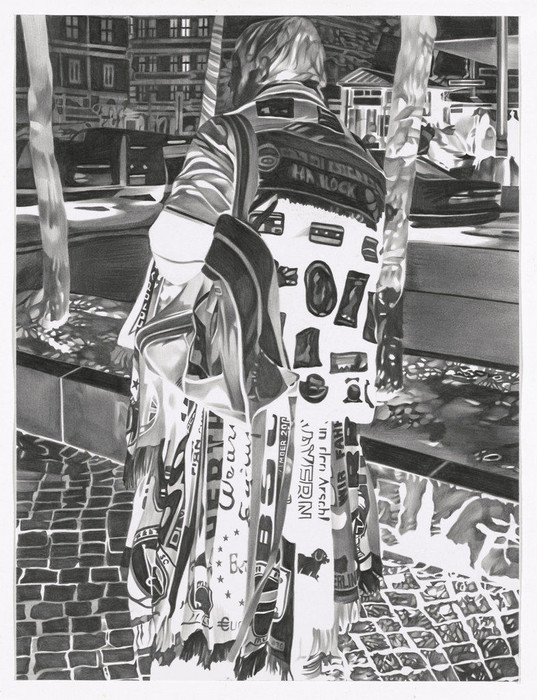 Light and dark, movement and stasis, high and low: the art of Marc Brandenburg is shaped by contrasts. The variety of colour in the original photographs dissolves in their transformation to drawings done in monochromatic shades of black and white. The spontaneity and liveliness of the snapshots is contrasted against the disciplined precision of the act of drawing; the motifs seem to freeze under a layer of cool graphite with a metallic gleam. Trivial subjects are transferred to drawings on paper with the utmost perfection.

Marc Brandenburg finds visual motifs in his everyday environment. Using the camera, he takes shots of both friends and acquaintances as well as anonymous figures and scenes. The photographs that thus emerge are subsequently altered using technical processes. Brandenburg then selects from among these altered images, drawing them by hand in sittings that can last for hours. He proceeds in a similar fashion using illustrations from journals and magazines. But it is not the reproduction of the motif as precisely and perfectly as possible that is in the foreground: “For me, it’s not about mastery or a perfect drawing, but rather the meditative, the manic.” Using this procedure, he counters the classical drawing in several ways. While the drawing originally served as a preparatory model for a painting, in Brandenburg’s work it becomes the final form. Traditionally seen as a medium of the most authentic artistic expression, the drawing now presents itself as a well-considered, distanced end product without personal colour.

In the exhibition "Bonkers" Marc Brandenburg turns towards a difficult and disturbing spectrum of issues. The significance of the individual subjects is consciously left unclear, and the titles do not help us to identify the scene. Brandenburg thus challenges us to form our own conclusions, refusing the immediate demystification of each and every puzzle in the multimedia age.

Alongside figurative motifs, abstraction is taking on an increasingly important role in the work of Marc Brandenburg. His figurative drawings can already be seen as a first step towards abstraction, for he removes his protagonists from reality by transferring them to negative images, placing them between form and dissipation, dissolved into shades of light and dark. In selecting his works, he focuses primarily on their interaction in an ensemble: “It’s not about individual representations but about the overall impact. My figurative drawings operate like an abstract flash of inspiration.” On the next layer, he reduces the visual structure of the motifs still further, and allows them to fade away into hazy layers on the paper. It could be about a mere ornament or the echo of a three-dimensional, perhaps even human form. In Brandenburg’s own words, “It’s all about thinking about what abstraction actually is.”

In the three front room’s drawings Brandenburg makes reference to the constantly repeating course of water running through a fountain. These drawings served Moritz von Oswald and Max Loderbauer as a starting point for a musical intervention. With the help of the computer, Brandenburg’s works were “scanned” and transformed into tones. Variations of light and dark became sounds. The horizontal black and white shades of the drawing fixed the speed of the acoustic series of sounds, while their vertical layout defined the frequencies. From the digital data Oswald and Loderbauer created a targeted sound composition.