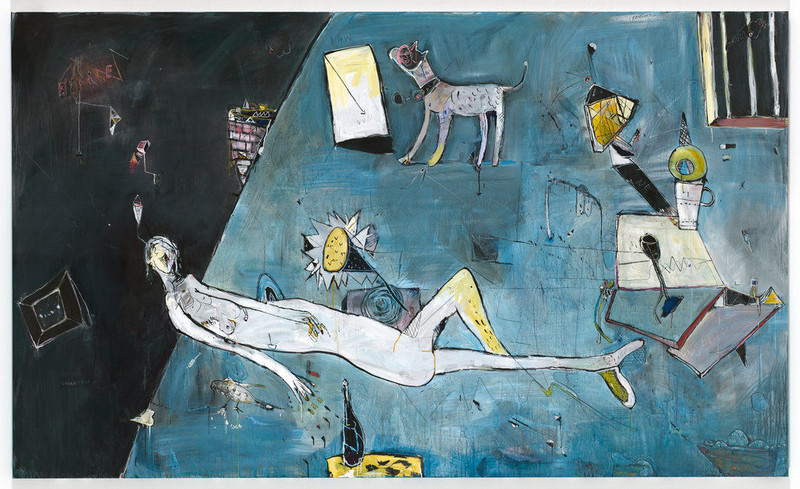 Contemporary Fine Arts is pleased to present the exhibition “Akt mit vier Beinen “with new works by Marcel Eichner (born in 1977). This is Eichner’s third solo show at the gallery since 2010.

In contrast to earlier, sickly pale crowded panoramic images, depicting graffiti-like elements of architectural structures, bodies, and grimaces – two of them are on view in the current show – more recently the artist has shown a penchant for colours and spatial reduction. The backgrounds are now frequently in a bright orange, yellow, pink, or blue, frequently large black fields are added, while the figures still usually remain white – as if without the space surrounding them, they would be invisible, ill, broken, and moribund.

With their hatched, almost calligraphic aesthetics, the paintings are reminiscent of their expressionist precursors – for example works by Erich Heckel or Max Beckmann – while the existential tenor evokes Philip Guston’s dispersed scenarios. In view of the relatively small heads on cloddish bodies, Georg Baselitz’ paintings of heroes come to mind, as well as the strange creatures of George Condo or Jean-Michel Basquiat, and indeed echoes of Bad Painting in general. However, these are all just diffuse associations: Eichner does not borrow from older artists to use for his own concept. “I wake up in a dream and think up the rest”, this is how he comments on the way he finds his motifs, stressing the spontaneity of his approach. The painting as a concentrated emotional expression helps him to stand and control his fear; it gives him a hold that the world cannot offer. The production of pictures is for Eichner an inner need to “return the ghost back to the bottle”. Indeed, Eichner’s paintings have a ghostly quality. Between linguistic fragments, dripping ink and small, out-of-place details – helicopters, windmills, ice cream cones, edges of furniture – a surreal, flickering atmosphere emerges that seems to float above the remnants of broken civilisation like a cloud of sulphur. Eichner’s paintings do not need a concept; rather, they are a continuation of a Nitzschean “Dionysian artistry” between intoxication and deliberation. Even though Eichner draws from the depths of his deeply personal feelings, he uncovers a universe of the tragedy that is man, which he can only cope with through his paintings. This is how Eichner puts it: “Painting is closing the wound.” But after every painting, the wound opens up again.