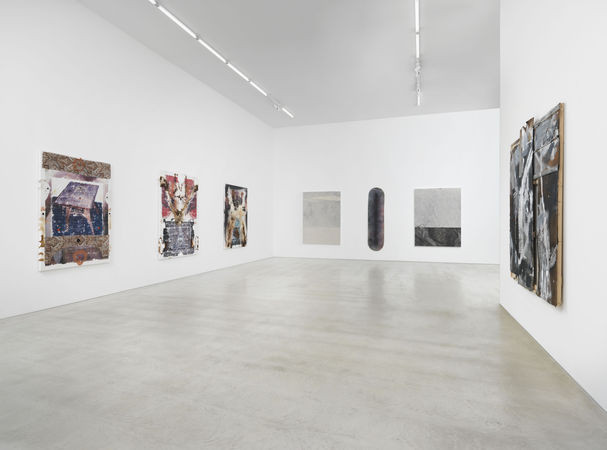 It is often said that young contemporary art has been for a while now greatly inspired by minimalism. These days, less seems more again, and reduced gestures, colours, and materialities are fashionable. Before this background, the title MAXIMALISM is intentionally quite controversial. However, this provocation is directed not so much against minimalism – indeed, some of the works included seem quite minimalistic – but rather against an art business that is increasingly determined by trends and has a tendency to over-simplify.

The exhibition brings together artists who explore, research, apply, and take to their limits the absolute maximum of possibilities for image production that are available today in order to produce works that in the end insist on panel painting as a point of reference. However, a paintbrush was not used to a significant extent in any of the works in the show.

Lucio Fontana in Europe and Robert Rauschenberg in the US were the pioneers in revolutionising painting in recent art history. After the shocks of abstraction and Malevich’s Black Square at the beginning of the twentieth century, both these artists significantly expanded both painterly means and the pictorial space. While the former still questioned the “tyranny” of two-dimensionality by perforating his works, trying to arrive at a balance between the idea and its physical manifestation, the latter strove to integrate the everyday and its traces, the social, into painting. With his “Combine Paintings” he was path-breaking for a radicalisation of the canvas that went beyond oil paint and conquering the space outside.

Broadening the classic notion of what a picture is did not make it necessarily easier for subsequent revolutionaries of painting to assert themselves within this nonchalance of “anything goes”. The formal variety of the artistic positions here assembled demonstrates that this path can lead in quite different directions. “Maximalism“ doesn ́t aim to form a new movement or “label“ this becomes evident through the radical individuality and originality of the artist ́s positions in this show.

With Rosy Keyser and Borden Capalino, the maximalism stated in the exhibition applies quite literally and radically to the materials used. Both integrate found objects and, broadly speaking, trash into their pictures. With Capalino, this includes the remnants of modern urban everyday life – things that have an expiration date either because of their organic nature or because of technical standards. Rosy Keyser also uses natural, organic and inorganic material like sand or sawdust, ropes, wood, corrugated iron, revealing their intrinsic energies in the composition of her radical assemblages. Sam Moyer also cedes some control over her works to nature, namely sun and rain that leave traces on her canvases which have been partly dyed in ink. The resulting all-over pictorial structures, meditative and reminiscent of seascapes are contrasted in her latest works with marble slates. Sachin Kaeley’s seemingly hyper-realistic small paintings foil modern 3-D-screen aesthetics by imitating them in an analogue, handcrafted way. Although Kaari Upson started out as a painter, of all the artists assembled for this exhibition, she has moved furthest away from this medium. Her latest works, mattresses and carpets cast in silicon, to which she adds colour during the process of casting, can perhaps in a very broad sense be understood as contemporary still lifes, which historically speaking were always simultaneously a memento mori and a study of certain milieus.