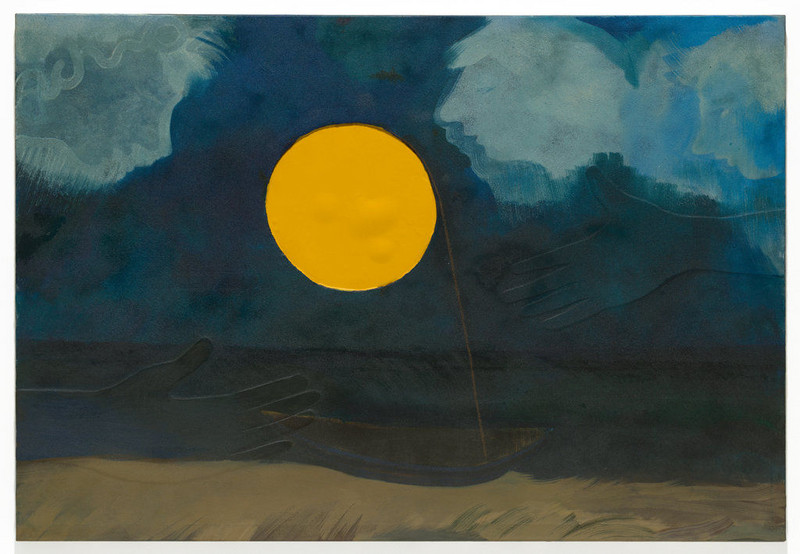 We are pleased to present new works by Peter Böhnisch, in his second solo exhibition at Contemporary Fine Arts.

A boat drifts in the middle of the turquoise blue sea towards the shore. In the boat lies a figure, slumbering deeply and nestled in the protective walls of the boat. On land opens up a circular expanse, which seems to rise from the depths of the painting and may belong to another reality. In the circle a figure kneels, adorning an abundant headdress of green feathers. Another work from Peter Böhnisch shows people who have congregated around a body of water. They all belong to different cultures, even times. Yet they are unified in their activities and emerge as one.

When the meaning of these scenes is not completely to decipher, the work invites a short pause, to contemplate them in a moment of silence. The works can be understood in a completely different way, not through the mind but through the emotions. The works are based upon the existential element of existence - humanity, the interplay of the elements. Furthermore a second spiritual layer is addressed, a kind of mystical-spiritual, emotional reality. Yet this is broken up through humorous representations, for example the motorbike which fights through the desert-like vastness.

Just as complex as the meaning of Peter Böhnisch’s work is, so is the technique. While until now he has produced both canvas and wax, he is for the first time integrating both elements creating three dimensional pictorial worlds, which are partitioned into several layers. In the middle of the rough canvas open up round forms which are filled with wax. The wax is in part smoothly applied, part moulded or from relief-like figures populated. Peter Böhnisch layers the deep coloured pigments on the canvas, so that a sandy plastic structure emerges. With ink and acrylic he adds detail to the works.

Peter Böhnisch, who was born in 1977 in Waiblingen, studied at the Staatliche Akademie der Bildenden Künste in Karlsruhe under Anselm Reyle and Andreas Slominski.