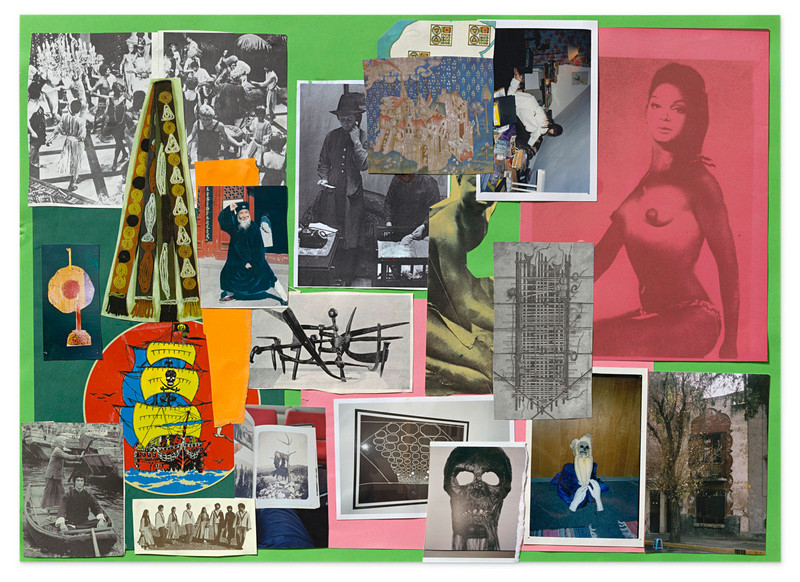 Contemporary Fine Arts is pleased to present the exhibition „Garbage Man“, with TAL R (*1967 in Tal Aviv, Israel) – our eleventh solo exhibition with the artist.

„Garbage Man“ – could refer to Tal R himself as manic collector of what other people would perhaps refer to as refuse. Collecting and arranging of images is an integral component of his artistic practice and arises in its own manifestation from an inner necessity. The Yiddish word “Kolbojnik” (Waste, Remains) also runs through the work of the artist within the titling of many of his works. His collection, which can be found within the individual collages, consists of an eclectic mix of “primitive tribal art”, art history masterpieces, pornos, comics, private photos, childhood pictures, sketches and picture book illustrations, and was collected by Tal R over a period of 25 years. In 2013 he then compiled and arranged the collection within 200 frames as the complete installation “Garbage Man”.

The works evoke in their pseudo-encyclopaedic phenomenon associations, Aby Warburg's Mnemosyne Atlas, or, to refer to another artist, the Atlas by Gerhard Richter. Similar to him, the arranged pieces within the collages from “Garbage Man” served and serve the artist also as templates for paintings and sculptures. The horror vacui, which overwhelms us in every individual collage, becomes more potent through the – frame to frame – hanging of the work.

„Garbage Man“ was first shown in 2013 in Tal R’s large museum exhibition „The Virgin“, at ARoS in Aarhus, Denmark. After the presentation at Art Unlimited in Basel 2015, the exhibition now at Contemporary Fine Arts this March will be the third iteration of the installation.