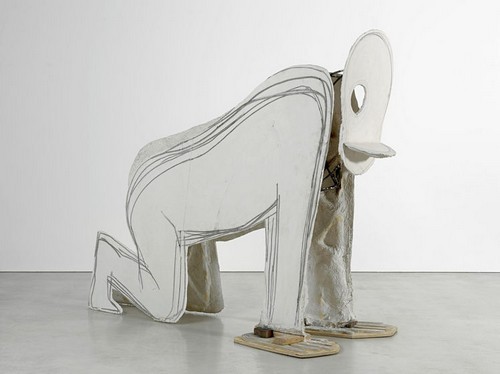 Contemporary Fine Arts is pleased to announce the first solo exhibition by Thomas Houseago in Germany. ‘There is a crack in everything – That’s how the light gets in’ brings together new sculptures, masks, plaster panels, and works on paper by the artist, who was born in 1972 in Leeds.

Houseago creates monumental figurative sculptures in powerful poses. Their larger-than-life bodies confront the beholder aggressively; they seem like rather coarse, lurking, and animalistic heroes. The sculpted plaster and the impulsive drawings on the plaster panels that underline the bodies’ contours make Houseago’s dynamic working method clear. The skeletons of iron bars that remain clearly visible underneath the plaster open up the bodies and reveal how they are constructed. When we walk around the sculptures, we see how Houseago consciously grasps and develops the flatness as well as the three-dimensionality of individual body parts.

Formally, the artist proceeds as follows: he builds support structures (modelled on the human skeleton) that give the bodies inner support. Additional materials include wood, plaster panels, and hemp. Around and on top of this structure, body parts are formed with plaster. Wherever plaster is not used, or wherever the artist decides to work two-dimensionally instead of three-dimensionally, wooden or plaster panels are being used. The sculpture Monumental Figure, measuring 3.6 metres, for example, which is making its first appearance in this exhibition, is modelled realistically in three dimensions from the feet to the hip. The upper body, on the other hand, consists of a plaster panel, from which the shoulders, stomach and the arms (akimbo) are cut out like stencils. The way the muscles are printed onto the upper body is reminiscent of a sketch. Behind the panel representing the upper body, the reinforcement steel connecting and supporting the head and the legs is visible. The head is once again made of plaster.

Houseago thus plays with the world of signs, of representation – on several levels. Parts of the works are modelled almost realistically, while other parts merely allude to body parts, symbolically pointing towards what keeps the figure from being a completely three dimensional sculpture mimetically representing the human body. In this way, the sculptures oscillate between these various levels of representation.

Sculpture ensembles on classical or baroque buildings often have a show-side and a side that is not visible to the beholder. From below, the beholder gets the impression that he is looking at fully modelled figures. However, given the opportunity to look at these sculptures closely, their façade-character reveals itself. They are only modelled in the front, hollow inside, and also have iron supports. Here, looking at the back, we are surprised by their fragility and their fragmentary character. Houseago combines the show and back sides and takes advantage of the confusing effect of this interplay.

‘There is a crack in everything – That’s how the light gets in’ is Thomas Houseago’s first solo exhibition at Contemporary Fine Arts.