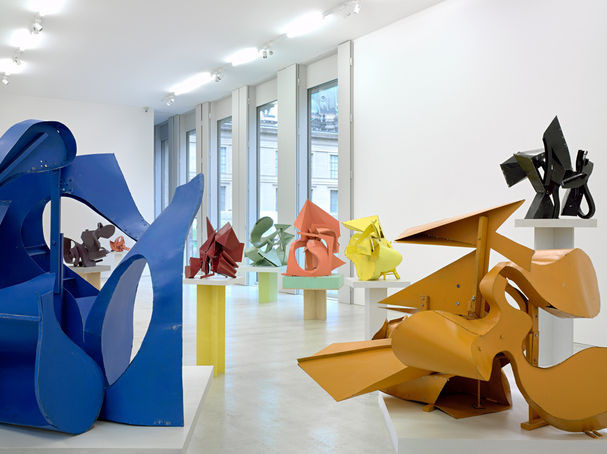 We are pleased to present the first solo exhibition of Thomas Kiesewetter at Contemporary Fine Arts. The artist, born in 1963, lives and works in Berlin.

Thomas Kiesewetter began his artistic career at the end of the 1980s with study at the Berlin University of Fine Arts. While devoting himself primarily to painting, he has been working sculpturally since 1999. In New York where Kiesewetter lived at the beginning of the millennium his sculptural vocabulary defined.

In the production of his sculptures, Thomas Kiesewetter always uses the same work-stages: at first he sketches the outlines on paper in order to try out the interplay of the individual elements of lines and surfaces. To calculate the effect in space he then makes a full-scale model out of cardboard. This is followed by the final realization. Sheet metal painted in monochrome is bent into the shape of the cardboard model, welded and screwed together. The completed sculpture is then finally mounted onto a pedestal especially conceived for it by the artist.

Colour plays a special role in the work of Thomas Kiesewetter. It is laid like a cloak over the individual parts of the sculpture, connects what are apparently independent parts, mediates and evens out. The visible traces of the manual processing of the metal – splinters of paint, furrows left by scratching, drilling holes – contribute to making this cloak seem neither like a cast, nor like a rigid figure. Rather, it allows them to grow together organically and thus refers back to Kiesewetter's origins in painting.

The sculptural formations by Thomas Kiesewetter that arise in this way withdraw from any attempt to interpret them. Sometimes strongly expressive, almost figurative, and then characterized by a mechanical hardness, they remind one of the machine art of constructivism as well as of abstract post-war sculpture in the United States oriented toward artists such as Anthony Caro. However, although these reminiscences are undeniable, they can never be evaluated as quotations. Kiesewetter is concerned with creating something new, with the contemporaneity of sculpture, which invents itself anew, but in doing so, does not forget the achievements of the past.