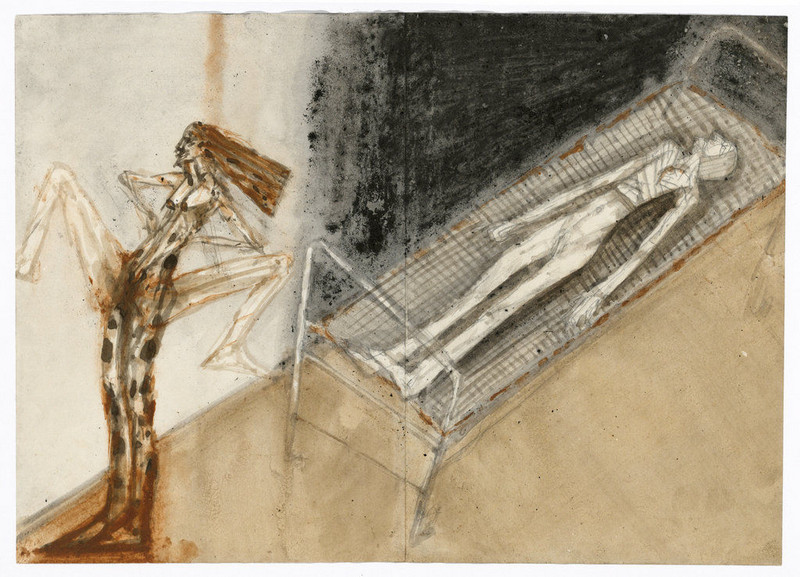 Sadly, our second exhibition featuring works by Walter Pichler is a posthumous one. Still during his lifetime we asked the artist for a further presentation, euphoric over his tremendous exhibition in MAK 2011 and still deeply impressed by our own first show with Pichler, with which we were able to open our new gallery space Am Kupfergraben in 2007. “Es ist doch der Kopf” was how Pichler had entitled the exhibition. Beginning with his work on the sculpture “Schädeldecke (wie ein Gebäude)” (Top of the skull [like a building]), the artist looked through his entire oeuvre of drawings for works on the subject of head and found an astonishing amount – from early architectural plans through dreamlike sketches to spatial situations. This them atic approach, of researching within his own work for a certain aspect was a new way for Pichler to work, after all, to date his exhibitions were either organized as museum retrospectives or devoted to the current architectural project.

For this second exhibition, together with Elfi and Anna Tripamer we have chosen the same unusual approach for Pichler, conceiving a renewed theme instead of focusing on an architectural project and the corresponding drawings.

We gave thought to what theme repeatedly emerges in Pichler’s oeuvre over the decades, what aspect runs through the entire work, and yet was never the focus of an exhibition. The most important challenge in Pichler’s considerations, also his most important architectural challenge is man and being human, “as evidenced by the large number of drawings of the figure and the dualistic principle of sculpture/architecture,” states Bärbel Vischer in the catalog at the MAK 2011. The human dimension is characteristic to all of his post-utopian architectural models. It is not without ground that the nucleus of his sculptural and architectural creativity is a farm, built by people and housing the history of generations of people, later of himself and his own family. Thus the human figure is the subject according to which we+ selected the exhibited drawings and sculptures from the entire period of his artistic creativity. Rather uncon sciously we seek to complete the preceding “head-based” presentation, demonstrate a holistic approach in contrast to a view restricted to tops of skulls. Walter Pichler was himself a deeply holistically thinking and working man and artist, and hopefully he would have liked this concept.

The sculptural core of the exhibition is formed by the sculptures “Bett” (Bed), “Kleiner Rumpf” (Small Rump), “Alte Figur” (Old Figure), “Schlafender” (Sleeping Man) and “Der dritte Vogel” (The Third Bird). Man is born and he dies. Inbetween he lives, loves, works and sleeps. He lies down, sits, stands and walks. And if he is devout and has lived a decent life then maybe he will to Heaven.

The catalogue is consciously devoted to the drawings. Already from the early 1970s drawing liberated Pichler from his architectural and sculptural works, thus for 40 years his drawings have been more than just a by-product. In this exhibition for the first time drawings depicting the human figure are the central theme.

In these drawings Pichler never fell into the trap of trying to convey autobiographical sentiments. And those works that might be seen in light of his biography as documenting personal matters, are always committed to a general archaic of the human. A precision trained by his construction drawings for sculpture and architecture also kept him in his depictions of people from succumbing to pathetic expression even in the more sublime, heart-warming or surreal situations. “The dialectics of his handling of pencil, ink, and tempera colours is connected with the function that Pichler assigns them”, was the apt comment by Klaus Gallwitz 1996 in relation to the joint exhibition “Joseph Beuys, Walter Pichler: Zeichnungen”.

More than the sculptural work, which in keeping with Pichler’s wish will not permanently leave the context created for it in St. Martin, the drawings must now assert themselves autonomously. The exhibition and this catalogue demonstrate that they are highly successful in doing just that.