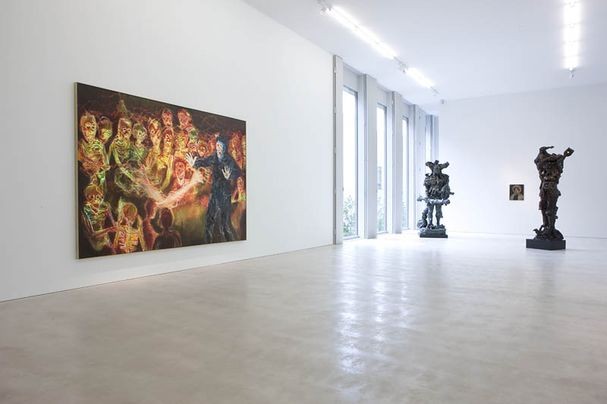 "Whole Lotta Love. You' re just too good to be true"

Contemporary Fine Arts is pleased to announce the group show “Whole Lotta Love. You’re just too good to be true” taking place from June 21 to August 16, 2008.

The title, “Whole Lotta Love”, quoting the hit by Led Zeppelin of 1961, is on the one hand an avowal of love and respect to the participating artists, while at the same time being the only set ‘curatorial’ parameter.

The work “Led Zeppelin is for Poofs III” by Sarah Lucas from 2002 was a must: a phallic-shaped concrete Zeppelin with which the artist indulges her hate-love relationship to the British rock band, countering the machismo of the texts by Robert Plant and Jimmy Page.

“Way, way down inside, I'm gonna give you my love,
Wanna whole lotta love?”

Jake and Dinos Chapman alter Victorian portraits. These served the purpose of representing the wealth and respectability of the British upper classes. “One day you ́ll no longer be loved” is the rather resigned title of the painting in this exhibition. Because time pays no heed to wealth or status.

At first sight, Albert Oehlen’s lady in “Song X” seems like the guitarist from a flamenco class at the local adult education centre. Behind her innocent smile, however, the wild knowledge of the incomparable legendary riff from “Whole Lotta Love” shines through. Robert Plant: ‘Page’s riff was Page’s riff. It was there before anything else.’ Jimmy Page: ‘I did the descending riff with a metal slide and backwards echo. I think I came up with that first...’ Zeppelin-like, mysterious flying objects also appear in “Song X”.

In the three portraits of his wife Elke, Georg Baselitz copies the visual effect of photographic negatives, which in the age of digitalisation are considered an outmoded medium. Thus an echo of mourning the transitory that is always already inscribed in love, resonates within these images. The portraits of Elke are, quite apart from painterly problem solutions, continuous declarations of love to his wife, who has been his model for some 50 years now.

In his Styrofoam works, the artist Andreas Slominski demonstrates how a repertoire of clichés is often used in the visual representation of love. By combining garish colours and naive shapes with the artificiality of the material Styrofoam in his large installations, he carries the generally known clichéd representations of love to an extreme.

In her large works on paper Monica Bonvicini quotes – before the background of houses destroyed by the hurricane Katrina in New Orleans – poem fragments by Dorothy Parker:
„...and if I love you Wednesday so what is that to do...“
“...I don ́t love you Thursday so much is true...”

In a manner characteristic for his early works, Jonathan Meese paints on and alters models that he extracts from various publications. By supplementing these models with texts and images from the world of his own imagination, he fractures their original meaning. Meese’s work is an assemblage of traditional historical, religious, and mythical signs and images. In the large accessible installation in this exhibition, Meese combines collages from earlier works and merges love and violence into a morbid whole, at the centre of which stands a new triptych, dedicated to his mother and entitled “MUTTCHEN DON MEESELS PISSGELBE PENNSTÄTTE PENNTS WEG. (A.d. Large)”.

The works in this exhibition share above all a scepticism towards canonical ideal notions of love and phallic overestimation, which for decades have catapulted songs like the ones by Frankie Valli and Led Zeppelin into the charts.

Contemporary Fine Arts dedicates this exhibition to the artist Angus Fairhurst, who earlier this year took his own life. He was – to quote the song by Frankie Valli he loved so much – ‘just too good to be true’.