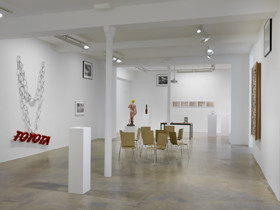 
“I am very fond of gold, because it is symbolic.
I look at gold in a disinterested way;
Gold is like the sun, it is unalterable.”
Marcel Broodthaers

“I believe enormously in eroticism, because it is something truly general throughout the world, something that everyone understands. It replaces, if you wish, what other Literary Schools call Symbolism, Romanticism. It could be another “ism”, so to speak.
I don’t endow it with any personal signification but, basically, it is a real way to bring to light things that are constantly hidden – and they aren’t necessarily erotic – because of the Catholic religion, because of the social rules. To be able to reveal them and to place them at everyone’s disposal, I think this is important, because it is the basis of everything, and no one talks about it.”
Marcel Duchamp
www.crousel.com