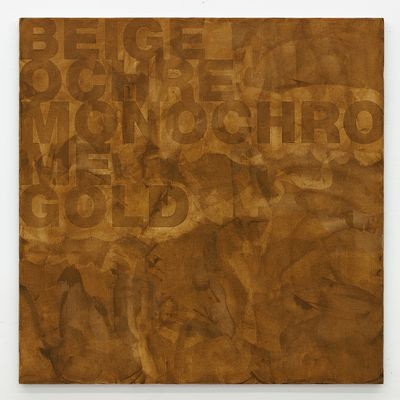 Two spaces for an exhibition, one expects for an intervention playing on both spaces simultaneously, even a re-duplication. Heimo Zobernig is usually keen on working on the question of the double: the double of the artist, the double of the space, or the double of the piece whether it is with mirrors, in the video Heimo Zobernig explains to his double how to make a performance, during the re-activation of a symposium, or even by showing his catalogues along with their references...This time at the Chantal Crousel Gallery, the doubling is not so evident. In appearance, one space, La Douane is dedicated to video works and sculptures, some dating from the 1980’s while a recent series of paintings is on display at the rue Charlot space.
What could be said of paintings where words seem to surface from a haze? The paintings are made with adhesive letters placed on the canvas and covered by a layer of white paint. When the adhesive letters are removed, a light relief appears between the letters and the background and persists when other layers of paint are applied with a palette knife. Sometimes part of the background is painted directly in brown or blue onto the canvas, which allows for a darker effect. Depending on the configurations, the words then seem to emerge from or sink into a sort of haze. This produces a phantom-like effect in which the pure and minimal form is no longer the privilege of the language. Prior works of Zobernig’s, as in the “REAL” series, billboards “AMERIKANER”, “dCONSTRUCTIVISM” or the panel “SKULPTUR PROJEKTE MÜNSTER” address such issues. Yet the letters now appear in tonal withdrawal or in tonal advance, and form words succeeding one another, sometimes with repetitions or clippings. What could we think? Lists interrupted of artistic genres, as if Zobernig was trying to convince or remind himself what it is about (PAINTING/PAINTING/SCULPTURE)?
Bizarre play on words (PAIN/TING/PAINTING)? A form of irony towards conceptual artists, guardians of the rules of language, in the way of Joseph Kosuth. (BEIGE/OCHRE/MONOCHRO/ME/GOLD)?
Or associations that might make one smile (CONSTRUCTION/CHARM)? These are only speculations because “the text is not really on the visible surface,” says Zobernig. “These are paintings – colour and form – the words are like watermarks on the canvas. A phenomenon.”
On some of these paintings appear one or more red lines, which interfere with the hazy backgrounds.
Are these lines the contours of forms reminiscent of art history? “Sometimes I know, sometimes I don’t know,” explains Zobernig, referring in that regard to an artistic unconscious by way of the young Ruskin and his obsession with motives, as described by Rosalind Krauss. It is true that recently, rather surprisingly, Zobernig started introducing curved lines and dots in his series of paintings inspired by research on Piet Mondrian and Ian Burn, even though he hasn’t ceased exploring the questions left open by geometrical abstraction. The curved lines re-introduce here a subjective dimension into a field – geometric abstraction – that is focused on objectivity. “The free line is the subjective form but also the way to search for the good form. The grid stays objective,” Zobernig says. At the same time, the introduction of anthropomorphic figures in the videos and in the sculptures, also correspond to a form of subjectivity. For example, a video showing him engaged in a fight with vaguely human coloured shapes in chroma key colors – red, blue, and green – along with two sculptures from the series of “lamps – shelves – mannequins” are presented in the space of La Douane.
The Lexikon der Kunst 1992 consisting of a glossary of lists of words composed with Ferdinand Schmatz, had provided Zobernig with a system, which allowed (in conjunction with the graphic designers from Experimental Jetset) for the creation of the posters and the cover for the catalogue of his exhibition at the CAPC in 2009. Much in the same way, the inventory of terms permits Zobernig to work the shape and the material of the words on the surface of the canvas. He thus joins a debate on the objectivization of poetry, undertaken by Mallarmé and Broodthaers, and that can be traced in the recent works of Josef Strau, Clément Rodzielski, Michael Krebber or Bernadette Corporation.