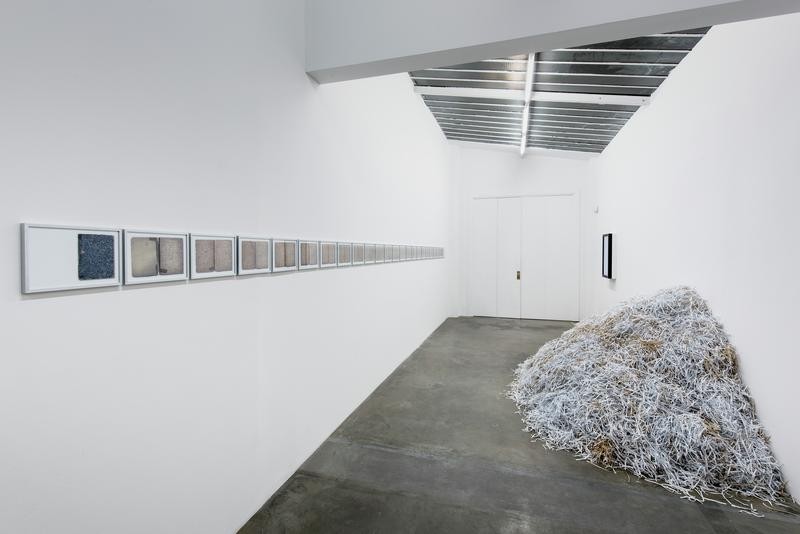 “Every situation is saturated with memory as well as perspective. Being aware of this delicate balance gives us authority over the present.” 1

The starting point of the exhibition is an exibition. Stutttering(Stut/t/te/ring, spelled with three T) extends a previous exhibition titled Stuttering (spelled with two T) featured at the CRAC in Sète, last July. Whether it be in the previous title, You are mY destinY (2003), or in the series Word(s) (2006-2014), Melik Ohanian revises the rules of typography, sharpening the ambiguity of words and expressions. Here, the notion of echo (and reverberation) that spring from repeating a single syllable characterizes the interplay among his displayed works. Almost thirty works are presented at Galerie Chantal Crousel and at La Douane to demonstrate the quasi syntactic way the artist works, the various perceptions, the coexistences of different dimensions (scientific, political, social, historical) that have always undergirded his approach and that reflect, in a more collective sense, our own rapport with the contemporary, global and dematerialized world, as well as our imaginary.

Stuttering is also the title of a series of photographs presented on plasma screen at La Douane. Melik Ohanian took two shots of a same subject (various varieties at the Palermo botanical garden), always the same framing, but with two different focal points. Both photos are then rhythmically animated in a loop, imbuing the image with a sort of inner life. This series of works is at the intersection of a proto-cinema or the futur of photography.

The phenomenon of dematerialization is pivotal to the exhibition. Pulp Off synthesizes a century of work dedicated to memory. It sets the diary of Vahram Altounian, who witnessed the 1915-1919 Armenian genocide, and the analytical work of his daughter, Janine Altounian, published in 2009 ; the programmed pulping of the book, and the recent digital scan of the book suggested by the artist to perpetuate this memory today.
La Douane is presenting a fourth occurrence of the installation: the remains of the book covers ripped by the artist, suspended between two temporal strata of a virtual hourglass. It’s a moment between the ante- and the post-. In contrast, the Modelling Poetry installation is the algorithmic result of a possible meeting of two galaxies, a reality as elusive in its sheer scale as in its fictional quality. The generated algorithm springs from an astronomical probability that is rooted in a continuity of movements measured in billions of years. While Pulp Off examines a continuum in history, Modelling Poetry digs into a dizzying past and kicks off a countdown of four billion years.

A similar appreciation of time is evident in the work Shell, seven sculptures in concrete. The cowry shells’ ambiguity, imagined as a first trading currency or as a tribe’s divine ritual objects, is augmented by their neutral gray hue and their modifed size. We could also figure them as archaeology finds representing another age. Also visible in the same room at Galerie Chantal Crousel, Transvariation, a luminous wall animation. A star-studded wall with pinpoints of varying intensity light, orchestrated by climate data from 1882-1883 registered at the first international stations in the Arctic. The two works meld figure a desert landscapes, devoid of humankind.

The exhibition’s grasp of time in its multiplicity – neither present nor future nor past – paves the road for inner journeying. The theme of this exploration has always been present in the artist’s work, like a primordial
condition of being of the world : Island of an Island (1998-2002) is an installation inspired by an expedition near Survey Island, off the coast of Iceland, Selected Recordings (2002-2014), photos of a wanderer, deliberately lack any indication of date or place, Seven Minutes Before (2004), a seven-screen video installation features cameras
shooting the same spot as it is crossed by protagonists from different continents (an Armenian kemenche player, a Japanese koto player, etc.). The presence of Red Memory in the exhibition is a new revelation. The photographs of Rajak Ohanian, the artist’s father, unveil to us how travel and cultural identities became a sensitive substance early in Melik Ohanian’s youth.

The notion of displacement is linked to the political dimension of Melik Ohanian’s work. The geographic zones that attract the artist all have a particular social context : White Wall Traveling (1997), on the abandoned docks of Liverpool, or DAYS, I See what I will See (2011) in migrant workers’ camps in Sharjah. For Return from Memory, Melik Ohanian visited a closed mine in Mexico just as the last miner appeared on the suspension bridge, a blending of a phantasmagorical vision with a resurgent industrial era.
On display at La Douane, the Girls of Chilwell was inspired by a little-known story of World War I, about a group of women who loaded munitions in a British factory that blew up in 1918. This time, the artist has used archival photos, shot on site, inside the factory, in order to make hyper-realistic white sculptures of the young women. The photo archives greatly helped in reproducing a part of their faces, but their bodies, hidden by the angle of the shot, had to be reconstituted. In 2005, Melik Ohanian launched the Datcha Project in a house in an Armenian village that was qualified as a " Zone of Non Production". For each each session, the artist invited people from a wide range of backgrounds to share a temporality of the space with no particular goal.

In exploring the Melik Ohanian’s various creative modes, we realize that the reasons for desertification (social, geographic, and geological) that are hallmarks of his work, tie in with another phenomenon, decantation : sample, wait, observe, extract. Thus, his Post-Images, for example, are a form of opposition to the news in the media. The artist only returns to the photos afterwards and only keeps a portion, a small island, a territory. The sum of the flux of data that individuals today ingest positions them in the hub of a complex network that combines politics, culture, and science. In this, Melik Ohanian questions the future of our collective memory as well as that of the individual. Will today’s society always be able to build emancipated identities, operable communities? Or will not learning about ourselves in our era wind up being so much praise for the standardization and the modes of boxed-in thinking? The exhibition Stutttering, via a travel through time and memory, brings us to reexamine the need of the attention.

1. Extract from an interview with Melik Ohanian
www.crousel.com