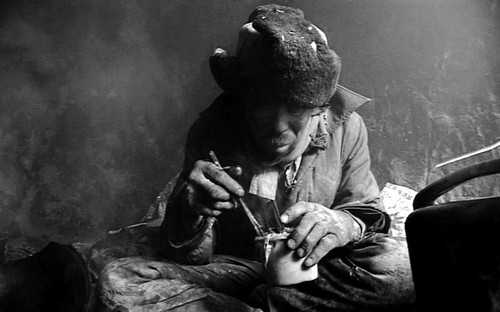 Chantal Crousel Gallery is pleased to present the first exhibition of the Chinese director Wang Bing.
Considered one of the most promising film-makers of his generation, thanks to the monumental West of the Tracks – a nine-hour-documentary on the dismantling of a huge industrial complex in China, acclaimed as a decisive work of the early XXIst century – Wang Bing stages his unique cinematographic grammar, through two intersected portraits.
Fengming is a striking account of political and social reality in China. The protagonist recalls her memories, started in 1949, and unfolds more than 30 years of her life. Almost four hours long, the film translates the suffering of a fierce battle and the necessity to survive. Without any cuts, facing camera, Fengming refinds a speech too long repressed. Free of premeditated screenplay, the narrative unfurls like a path to follow, while the woman’s movements and silences become moments of respite.
Man With No Name is a metaphor based on a real person, whom Wang Bing has been filming since 2007. The man lives in a cave, isolated from Chinese society, and deals with his survival with dignity and determination. He never speaks, refuses his country’s system and assumes his marginalization. Living away from the worlds of matter and spirit, he constructs his own conditions of survival.
Wang Bing’s cinema tackles the problematic of time and displacement. The notion of movement is essential; it is in the centre of the two portraits. Under Wang Bing’s eye the tragic becomes poetic, silence is magnified, time that passes becomes freedom.
On the occasion of this exhibition, Chantal Crousel Gallery publishes an A.S.S.N. notebook with an essay by Alexandre and Daniel Costanzo.
www.crousel.com