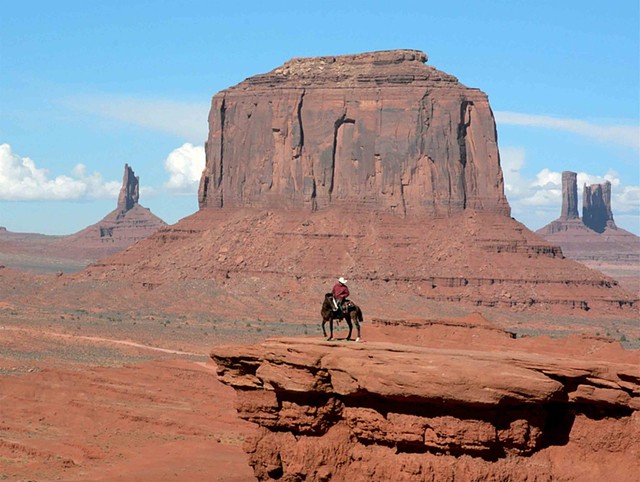 High on a rocky promontory, set against the background of the ruddy mesas of Monument Valley, a rider turns his horse. He marks a legendary spot. The site has a special place in the canon of Hollywood’s repertoire of images. It is from here that John Wayne looked out over the magnificent panorama of the Colorado Plateau in ‘The Searchers’; it was here that John Ford—the most Brechtian of filmmakers (Straub/Huillet)—set his camera and panned over the Mittens and Merrick Butte. He shot nine films in Monument Valley and the spectacular lookout point bears his name: John Ford’s Point.

The borderlands between Utah and Arizona belong to the Navajo Nation Reservation and members of this, the second largest Indian community in the USA, were actors and extras in Ford’s westerns in the 1950s and still work as photo models for tourists.

Dorit Margreiter opens her show with the wide open spaces of the prairie and the shot that has become a myth. The film, in a 16mm format, shows the rider and horse in movement, in a long shot and close up against the background landscape. The clatter of the analogue projector brings an avant-garde film feeling to the Cinemascope Western genre.

Magreiter has called her show ‘Neue Räume’. Taken literally, the title might apply to the newly-renovated gallery but might just as easily be taken as a daring metaphor for a new start or a scenographic code.

With her all-new works (2015/16)—film (installation), photographs, sculptures and exposures on paper—Margreiter has blazed an exciting trail through the gallery. She stages, orders, layers and stretches her subjects all across its spaces. The concern here is with the transfer zones between everyday life and exhibition space, the production of images and the consequences that the various forms of production and reproduction have on our perception.

There has not been a solo show by the artist in Vienna for a long time. For her first appearance at the Charim Galerie, Dorit Margreiter works with the linkages, connections and referential webs of content of the individual works between and to each other – over and above her usual confident handling of architecture, installation and display.

The lead piece is ‘Transfer (Monument Valley)’, the film at the beginning of the exhibition. At its side is a purely digital work from the ‘Experimental Noise’ series. The pigment prints show ‘interference’ filters used to impart credible age to the polished world of digital imaging using imperfections such as scratches, dust or chemical smears. These are commentaries on modern image processing that appeal to our yearning for materiality, handcrafted objects and analogue techniques.

‘Experimental Noise’ returns in the last room, this time in a dialogue with a freefloating mobile suspended from the ceiling. Dorit Margreiter has been working with kinetic sculptures since 2011. However, they have little to do with Alexander Calder’s playful arabesques. Letters that call to mind the functionality and simple clarity of Bauhaus typography form words. The semantic content of the aluminium templates, painted in various shades of grey, (each letter in a different colour) disappears behind the reduction of an abstract sign. Hung low so that it is somehow ‘in the way’, the object becomes a surface for projections of various spatial categories which go beyond pure determiners of location. The kind that Belgian word/image virtuoso Broodthaers for whom the space only comes into being when it is named and the kind that is most interesting for Dorit Margreiter: the permeable, flexible and mobile pictorial space in which the viewer plays a critical role as part of the image. Margreiter makes her space–time procedures clear with a series of wall works, exposures with titles such as ‘cinéma (Light Drawing)’. The cut-outs of the ‘cinéma’ alphabet are arranged on light-sensitive blue paper and exposed to the sun for a few months. The images are ‘finished’ when the artist stops the yellowing of this quasi photographic process by removing it from the light source. Abstractions reminiscent of László Moholy Nagy’s have been created.

Along with cross-references to constructivist photo objects, Margreiter occasionally dips into the movie prop box with relish, laying out Western film requisites such as snaffles, reins and spurs. In this way she points out how the time and place of an event or process mutually influence each other.

In the main room of the gallery Dorit Margreiter tells a story of production and destruction, of original and reproduction, using the Ennis Brown house in Los Angeles which was built by Frank Lloyd Wright in 1923/24 from prefabricated concrete blocks.

The relief ornaments of the ‘textile block system’ replicate motifs that are to be found in the ruins of the Maya city of Uxmal, Mexico. The house, a legendary film location— Ridley Scott shot material for ‘Blade Runner’ there in 1982—was destroyed by an earthquake and became a ruin. Restoration was not completed on one of the ‘100 most endangered sites’ in the world until 2007.

Margreiter’s black and white photograph show parts of the ornamental frieze on the facade as they lain there for years, in the rubble. In a stage-like setting she confronts the photograph with a life-size bronze cast of a wall fragment. If one is reminded of Joseph Kosuth’s ‘One and Three Chairs’ from 1965, one of the canonical works of conceptual art that interrogates the various manifestations of a single object, this is because Dorit Margreiter is also concerned with ‘using an area of discourse in order to describe another’ – two alternative reproductions, the shift from two to three dimensions using different mediums.

Finally, Dorit Margreiter completes her multi-layered exhibition in which various narratives interweave and link spatially with a minimalist room installation that carries the element of process within it – in front of the widows that open onto Dorotheergasse, tins, cylinders (or rollers) are arranged on a sheet of Yves Klein blue paper. By the end of the presentation the summer sun will have produced a wonderful in situ exposure. (Brigitte Huck)
www.charimgalerie.at