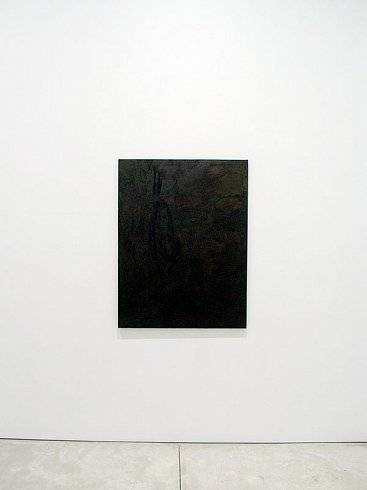 Cheim & Read is pleased to announce their first exhibition of paintings by Bill Jensen. The show is accompanied by a full color, limited edition catalogue with an essay by John Yau.

Over his thirty-year career as an abstract painter, New York artist Bill Jensen has been described with adjectives of a mystical nature, his paintings evocative of a primordial landscape in which color, form and space endure unexpected collisions on the canvas. Jensen's art is characterized as "visionary," "transcendent," "spiritually-imbued" and "post-apocalyptic," and is deservedly associated with similarly moody works by the early American modernists Arthur Dove, Marsden Hartley and Albert Pinkham Ryder. John Yau, in his essay for the exhibition, updates Jensen's colleagues further, paralleling him with Jasper Johns and Robert Ryman, and comparing the materiality of his painted surfaces to those of Jackson Pollock's.

Jensen was born in Minneapolis, Minnesota in 1945 and received his MFA at the University of Minnesota. He moved to New York in the early seventies and soon after began showing in well-received exhibitions where he was singled out for hypnotic, physically worked abstract compositions. Jensen has evolved stylistically, but his work continues to contain the same disquiet tension and experimental transmutation. His paintings ignore the rigid, physical boundaries of their square-edged canvases. Blind to balance and symmetry, Jensen's painted forms and colors are allowed to extend and collide; they exist apart from a regimented structural definition or grid. As Yau describes, "this sense that there is more than what is before us, and that the forms are part of the physical world the actual painting itself inhabits, is underscored by the forms extending beyond the painting's edges. Vastness and compression coincide."

Jensen knows the rules of painting, and the discourse by which it is defined. In this way, he knows how to break away from expectations and continually renew the viewer's experience. The works are not overly large (the biggest are around 4 feet high), and therefore request an intimate, individual viewing, optimum for an experiential reading. Ever-changing fields of color gyrate through the paintings, his forms elusive and instable. Jensen mixes the paints himself, thickening or thinning as needed for transparency. He also uses a wide variety of tools, some handmade, with which to spread, brush, pat down, smooth out and wipe away his paint, resulting in varied, textured and heavily worked surfaces. His colors, as seen in the recent works exhibited at Cheim & Read, are saturated and, though they are scraped away and built again, have certain clarity; they seem to vibrate with an aura-like intensity, like electric-charged neon or the residual trails of fallen fireworks. They are heady, sensory, and redolent of emotion; many have the sensation of exaltation. The intensity of color and composition befits the paintings' titles, especially the six named "Luohan." The luohan, disciples of Buddha, reached spiritual enlightenment, transcending worldly reality and the concepts of time and space. Jensen's paintings, in their way, have transcended the set boundaries of artistic abstraction and exist on an otherworldly plane of sensorial reaction.