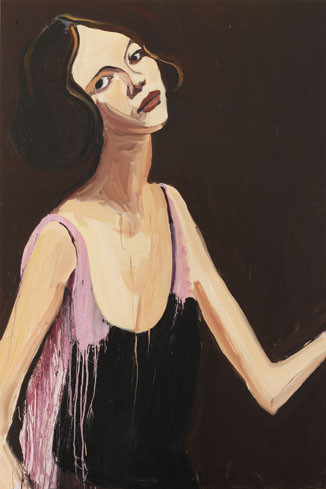 Cheim & Read is pleased to announce an exhibition of new work by British painter Chantal Joffe. This is Joffe’s second solo show in New York; her first was also with the gallery.

Born in 1969, Chantal Joffe received an undergraduate degree at Glasgow School of Art (the school was chosen partly because it offered figure painting, which has always been her subject), and her Master’s from London’s Royal College of Art in 1994. Joffe is often associated with the second, more paint-focused wave of young British artists, and gained attention in the late 90s with small, painterly compositions. Her canvases have since expanded significantly: several in this exhibition are startlingly larger than life (8 x 6 feet), and her subjects—often solitary females—dwarf the viewer. Tension oscillates between the paintings’ ambitious scale and the intimacy implied in the posture and gaze of the women represented. Even the smallest works in the show (just under 16 x 12 inches) hardly contain Joffe’s subjects, which are truncated in order to fit the confines of the canvas (see Esme with a Guinea Pig (2012). Joffe works from secondary source material, mostly culling imagery from fashion spreads, and references snapshots of children and friends. Her newest work also includes several self-portraits. Photography (Diane Arbus, Harry Callahan’s family portraits) is a noted influence, as is a varied group of painters from the art historical canon (Manet, Degas, Stella, Katz, Neel, Krasner).

Joffe’s use of fashion, while loaded conceptually (i.e. its negative associations with female objectification and the “male gaze”), derives from an honest and innocent appropriation of fantasy: Joffe chooses images that she finds most alluring, especially in terms of sparking imaginative narrative, and is driven by a love for and identification with the female form and its accessories. Further, the rich compositional elements fashion provides—texture, color, pattern—complement Joffe’s fluid and technically accomplished painting style (see Woman in a Red Flowered Dress or Blonde in a Shell Chair (both 2012)). Abstracted forms and saturated surfaces bring attention to the lush materiality of paint itself, a focus that has dubbed Joffe a “painter’s painter.” Though her work is loosely executed, it is also, in contrast, almost obsessively observant, capturing the unique qualities and details of her subject. She is no less attentive when painting herself—her sharp eye is enforced by the depiction of her body’s stark nakedness, a contradiction to the mostly clothed subjects of her other paintings. The color and pattern of herringbone socks and a striped chaise longue recurring in the self-portraits reiterates the distinction.

Joffe’s subjects—slightly distorted, sometimes cropped, confined by the vagueness of their setting or activities—allow for the viewer’s own interpretations. Emotional and psychological reaction to her work, and the self-guided, imaginary journey it provokes, belies any argument towards objectification. While the echo of feminist theory is inevitable and necessary, and perhaps enhanced by Joffe’s sometimes provocative re-appropriation of fashion photography, her work is distinctive for its unapologetic embrace and celebration of femininity. Through the ambiguity of her depictions, she rejects given definitions of womanhood, alluding instead to a long, multi-hued history of heroines, idols and icons, and to past representations of the female form. Many of her subjects are young—at the cusp of their potential—inciting further drama to their imagined narrative. But by adding her own image—less idealized and far more personal—she extends this arc further, allowing for the story to continue
www.cheimread.com