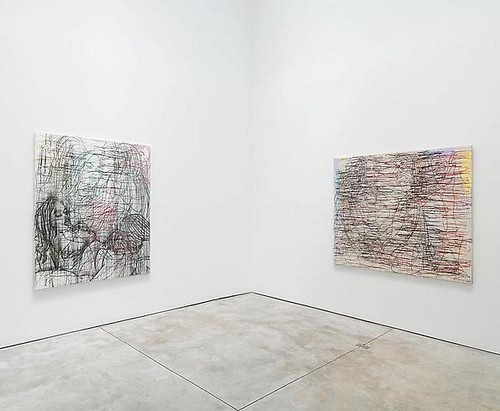 Cheim & Read is pleased to announce an exhibition of recent work by Ghada Amer. This is Amer's first solo show with the gallery. It will be accompanied by a full-color catalogue with an interview by Maura Reilly.

Ghada Amer was born in Cairo, Egypt in 1963 to a diplomat father and a mother with a PhD in engineering. A peripatetic childhood led her to art school in Nice, France, where she graduated with an MFA in painting in 1989, and then to New York, where she now lives and works. Her work has been included in several important national and international exhibitions, and was the subject of a Brooklyn Museum survey show in 2008, titled Love Has No End.

Though Amer's trademark material is brightly-colored embroidery thread, she primarily considers herself a painter. Her use of embroidery as paint intentionally confronts the traditional, male-dominated terrain of the medium and its academic equivalent in art history. Widely associated with femininity and domesticity (darning, sewing, needlepoint), the act of stitching is redefined by Amer's less tidy compositions. She often leaves excess threads and knots dangling; this additional layer of "mark-making" abstracts and obscures underlying imagery. Her technique also gives an organic, fluid sensibility to the meticulousness of the embroidery process. Amer reclaims lost territory: the skeins of thread accompanying her embroidered lines echo the drips and gestural brushwork of the Abstract Expressionists, and insists on an intimate reading of her work.

Expanding the boundaries of painting to accommodate her exploration of the stitched canvas, Amer's methodology demands a more feminine dialectic, and questions the classifications of sexuality, beauty, gender and abstraction. She reappropriates images from soft-porn magazines, often repeating or overlapping her subjects, the explicit imagery veiled and revealed by webs of thread. Her source material, originally produced to titillate, still has elements of longing and desire, but by guiding its reception to a new audience, Amer rejects the implied male gaze inherent in its origins as pornography. Though easily pigeonholed as making a political statement against the Muslim culture of her upbringing, Amer argues that the issues in her work are universal. Her critique of cultural conventions extends to all women, including in the United States, where sexuality has long been defined by a puritanical attitude.

New drawings at Cheim & Read, some done solely in saturated watercolor, focus on the sexual intimacy of one woman alone or coupled with another. Lisa and Britney, 2009, exposes the affair of two women in bright reds, pinks, greens, and blues. Embroidered drawings of similar subjects, like E-Big Kimberly, 2009, or E-Nicole, 2009, are punctuated by spiky knots, which subtly distort the composition. Amer's deft handling of her imagery provokes the viewer, and simultaneously challenges the hierarchy of traditional artistic foundations. While the drawings are overtly explicit, the paintings in the exhibition are increasingly abstract. Compositions like The Lollipop, 2009, and One Night in London, 2010, are made more intricate by drippy lines and blocks of painted acrylic color: the relationship between these areas and Amer's embroidery further augment the already multi-layered aspects of her work. Imagery used to construct paintings like The Waterfall, 2010, and The Black Bang, 2010, is partially hidden by a network of color and texture. The viewer is required to search for figurative elements beneath the abstraction, which in turn resonates with Amer's exploration of the painting process as a whole.

This June Gregory Miller will publish a major monograph by Maura Reilly with a text by Laurie Ann Farrell and an interview with Ghada Amer by Martine Antle.
www.cheimread.com