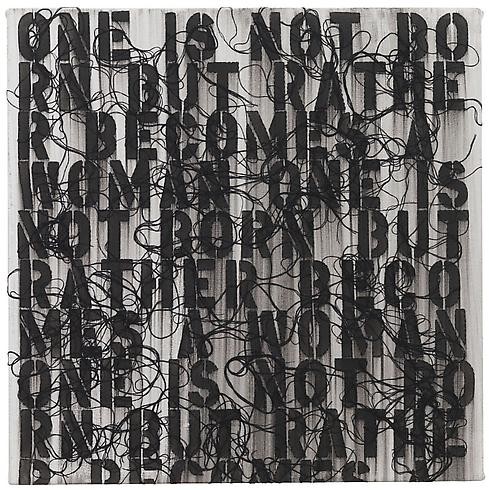 Cheim & Read is pleased to announce an exhibition of recent painting and sculpture by Egyptian-born, New York artist Ghada Amer. The show will be accompanied by a full-color catalogue, with an essay by the French art historian Anne Creissels.

Ghada Amer is well known for brightly-colored, embroidered “paintings” in which depictions of women, often appropriated from soft-porn magazines, are carefully stitched and sewn on the canvas. Extra thread is left to hang from the images’ contours like drips and splashes of paint, abstracting and obscuring the figures. By using the traditionally feminine, domestic activity of embroidery to re-contextualize her subject, Amer confronts cultural objectification of the female form, repositioning it for a feminist dialectic. In new works for this exhibition, all completed between 2012 and 2014, Amer also introduces text – both English and Arabic – to her compositions, thus merging language with form and literally weaving the two together. Where previously images were repeated and patterned across the canvas, now words and phrases, borrowed from feminist texts and manifestos, reverberate in chant-like rhythm, providing underlying cadence to the oversized, come-hither renderings of women’s faces.

Distorted by knots, webs, and skeins of embroidery thread, Amer’s text is a feminist “base” on which she situates her imagery. For example, Simone de Beauvoir’s statement, “One is not born but rather becomes a woman” vibrates behind the candy-colored threads of The Rainbow Girl, 2014; “No woman can call herself free who does not control her own body” produces the black vertical skeins which blur the open-mouthed Norah, 2014; the pastel-colored “I see my body as an instrument rather than an ornament” becomes almost indecipherable as it merges with the washy outline of the prone, bare breasted figure in Mandy, 2013. In other compositions, words alone are the focus: “Nobody gives you power you just take it” marches in stencil-letters across a rainbow-roll ground in Sunset with Words – RFGA, 2013. With these new works, Amer references not only the male-dominated history of painting (her “drips” of thread analogous to Abstract Expressionism’s gestural residues), but also engages what Creissels defines as the “phallocentric nature of language”– and thus aligns herself with other feminist artists (Barbara Kruger, Jenny Holzer) who reclaim language for feminine expression.

Also presented at Cheim & Read are a series of metal sculptures, in which word and image are calligraphically intertwined to create open, filigreed structures. As Creissels points out in her essay, the sculptures are “reminiscent of Mashrabiya” – the latticed wooden screens found in traditional Arabic architecture, which allow one to see out without being seen. At once decorative and structural, transparent yet unyielding, Amer’s sculptural works confirm the dichotomies that pervade her artistic practice. The cultural contrast between the Middle East of her youth and the America where she now lives and works has fostered Amer’s awareness of how one sees others and one’s self. It has also been a long-standing influence on her work, inciting her close examination of stereotypes and ambiguities. Her ongoing themes, found in the pairings of east/west, art/craft, image/text, masculine/feminine, and high/low, sustain a unique and provocative oeuvre.

Ghada Amer was born in Cairo in 1963. She attended art school at the Villa Arson in Nice, France, where she graduated with an MFA in painting in 1989, and now lives in New York. Her work was the subject of a Brooklyn Museum survey show in 2008, titled Love Has No End. Amer’s work is represented in many American and international collections, including Mathaf: Arab Museum of Modern Art, Doha, Qatar; Art Institute of Chicago, Chicago, Illinois; Centre Georges Pompidou, Paris, France; and the Tel Aviv Museum, Israel.
www.cheimread.com