I Am As You Will Be: The Skeleton in Art 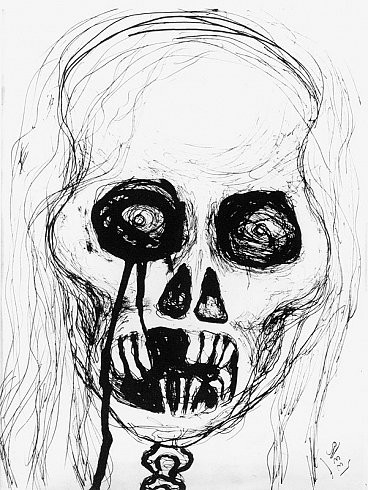 Cheim & Read is pleased to announce I Am As You Will Be, a group exhibition of more than thirty works which incorporate the skeleton as subject. Curated in part by the James Ensor scholar Xavier Tricot, the wide range of artists include Francis Alÿs, Donald Baechler, Matthew Barney, Jean-Michel Basquiat, Lynda Benglis, Michaël Borremans, Louise Bourgeois, Marcel Broodthaers, Salvador Dali, Paul Delvaux, Wim Delvoye, Marlene Dumas, James Ensor, Jan Fabre, Roland Flexner, Katharina Fritsch, Adam Fuss, Damien Hirst, Jenny Holzer, Jannis Kounellis, Sherrie Levine, Tony Matelli, McDermott & McGough, Robert Morris, Alice Neel, Pablo Picasso, Jack Pierson, Lady Pink, Sigmar Polke, Félicien Rops, Luc Tuymans, Jan van Oost, and Andy Warhol. A full color catalogue will accompany the exhibition, and includes an essay written for the show by Mr. Tricot.
The works in this exhibition are inherently connected to a long history of the skeleton's artistic representation, and are emblematic of human nature's ongoing and understandably invested interest in mortality. In his essay for the exhibition catalogue, Tricot summarizes the history of this representation, as well as the skeleton's appearance in science, literature and philosophy. Hidden but intrinsic to all living beings, the revealed skeleton has long been a harbinger of imminent death, directing the destinies of souls. It has appeared in its iconic, nightmarish uniform of black cape and scythe, has danced naked in a medievaljumble of bones (the "danse macabre"), and has waited patiently, skull-only, on the side table of a vanitas painting, with a vase of wilting flowers and a half-empty hour glass. Repeated, abstracted, and stylized through out history, the skeleton indicates the inevitable passing of time and ultimately mocks the fruitless hope for immortality.

Artistic representation of the skeleton first became common in medieval times. Engaged in human activity, with human characteristics, the skeleton figured in moralistic or religious tableaus by 15th century artists. Itwas also representative of the plague and the subsequent fear of death by disease. A similar preoccupation with the skeleton reemerges during the AIDS epidemic of the 1980s, when skeletons and skulls were integrated into the language of graffiti art, and artists incorporated the loaded symbol in their work. Tricot also points out the skeleton's representation in 18th century caricature and 19th century popular culture; it was used for sarcasm and critique in political cartoons and as campaigns against disease on public posters. In addition, the theme served as enticement to visit the local circus, which exploited its "living skeleton."

The skeleton finds its way into a hugely varied scope of artistic interpretation, from earlier allegorical explorations of Brueghel the Elder and the multi-leveled symbolism of Hans Holbein to the gothic meditationsof the Symbolists and the masked identities of James Ensor, and to the more recent horror vacui of the Surrealist Salvador Dali and the grave solemnity of Pablo Picasso's reaction to war. Alice Neel's painting of a skull set on an empty table is like a contemporary vanitas; the skull provides an otherwise minimal environment with a sense of passing time. Adam Fuss's daguerreotype of a skull, eerily beautiful, exploits the medium's metallic surface, so that the viewer's face is reflected within. The tactile surfaces of Donald Baechler's skull paintings belie the repetition of the immaterial subject, and Wim Delvoye explores the taboo, with a nod to modern science, in his erotic "x-rays" of misbehaving skeletons. The wide breadth of work in the show incorporates varied approaches to the subject, from the cynical, clever and perverse to the horrific, haunting and somber. It is an apt subject for our current condition.
www.cheimread.com